How do viruses do it? Their genomes contain much less information than the cells that they infect, yet they are capable within a few hours of turning an infected cell into a virus producing factory. What are the mechanisms involved? How does a virus shut down the host immune response? These are the types of question my research tries to answer.

We use biochemistry, biophysics, structural biology and virological techniques to examine how viral proteins interact with each other or with host proteins. We have published structures of viral proteins using X-ray crystallography and NMR and are now using EM to study how a vaccinia virus protein destablises host proteins involved in the innate pathway.

I studied biochemistry in Liverpool and London. Since my PhD, I have worked on the biology of many viruses, especially picornaviruses and vaccinia virus. I have been an independent group leader at MFPL since the early 1990s. Recently, I have published three text books on different themes and become editor-in-chief of Archives of Virology.

The N-terminus of vaccinia virus protein A46

The N-terminus of vaccina virus protein comprises only 90 amino acids. However, the determination of its structure was a tour-de-force of X-crystallography requiring special equipment at the synchrotron and ab initio solution of the phases using a supercomputer in San Diego and specialised algorithms. The N-terminal domain has a beta-sandwich fold that binds a fatty acid molecule in a unique way.

The Leader proteinase of Foot-and-Mouth disease

This proteinase has a papain-like fold. In contrast to papain, however, it is very specific, cleaving only one viral protein and a very limited number of cellular proteins. We have shown that this specificity is achieved by a unique ability to cleave before or after basic amino acids and specially developed sites on the enyzme to recognise upto 9 amino acids of the substrate. In addition, we predicted from its specificity that this protein would be able to remove ubiquitin and ISG15 proteins in infected cells, as we recently demonstrated. 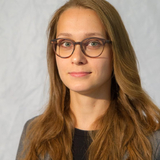 NMR analysis of the interaction of picornaviral proteinases Lb and 2A with their substrate eukaryotic initiation factor 4GII.

Characterisation and structure of the vaccinia virus NF-κB antagonist A46.

View all Publications of Group Skern

2016-2019: The Group Skern participates in the special Doctoral Program "Integrative Structural Biology" reviewed and funded by the Austrian Science Fund FWF. Tim Skern is the Speaker of the program.