A protein bodyguard – private security in the defense against oxidation

Oxidative stress is a biochemical condition in which the levels of oxidant molecules exceed the level of reductants (also known as anti-oxidants) in an organism. High concentrations of oxidants can alter the activity of enzymes and damage lipids, proteins and nucleic acids. Reporting in Molecular Cell, the lab of Javier Martinez reveals a novel and surprising mechanism of how an essential enzyme protects itself from oxidative stress. The tRNA ligase RTCB evolved with another protein whose sole purpose is to protect RTCB from oxidation. This protein, called PYROXD1, is linked to myopathies in humans and, paradoxically, uses a key cellular oxidant, NADP+, to protect its partner. 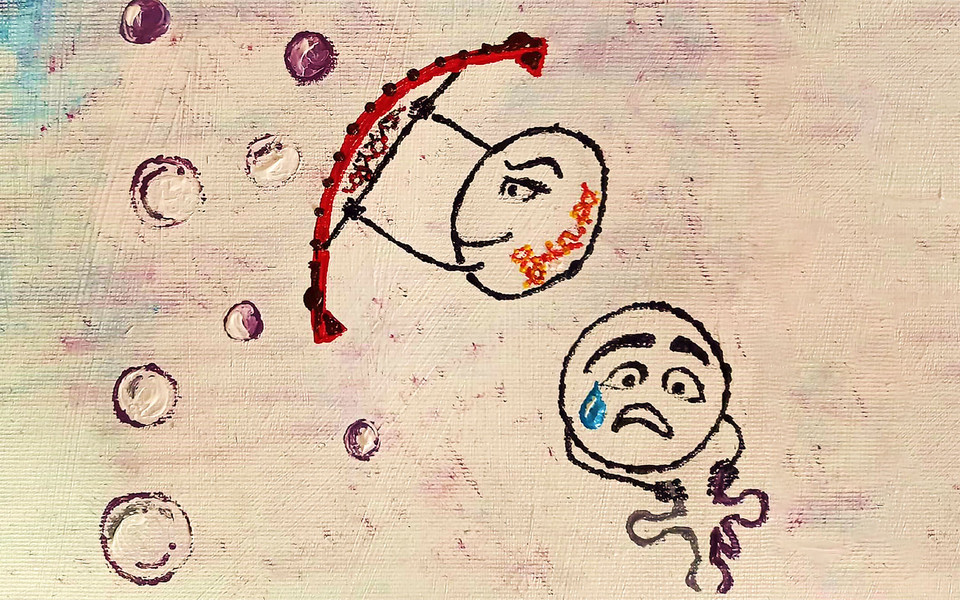 The emergence of oxygen in the ancient Earth posed a great challenge for enzymes evolved to function under anaerobic conditions. One such enzyme is the RNA ligase RTCB – pictured bottom right, struggling to join tRNA halves. To endure oxidative conditions, RTCB co-evolved with the dedicated protector PYROXD1 (depicted holding a shield). PYROXD1 utilizes the flavin molecule (represented in orange) and the cofactor NAD(P)+ (red) to shield RTCB from oxygen and reactive oxygen species (air bubbles), which would together with copper ions (violet balls) cause RTCB inactivation, abrogating tRNA biogenesis and stress response. (c) Tanja Asanovic

The emergence of oxygen on earth millions of years ago posed an existential threat to organisms and their constituent molecules that had evolved to survive under anaerobic conditions. “For systems optimized to function under such conditions, oxygen was actually toxic”, says first author and PhD student in the Martinez lab, Igor Asanovic. One such example is the ancient protein the scientist focused on in their study, tRNA ligase RTCB. This enzyme is essential for the maturation of tRNAs as well as for the splicing of an important messenger RNA, XBP1, which regulates the unfolded protein response. “Evolution took two routes to solve the problem. In plants and fungi, the protein was completely lost and replaced by another protein. But in animals, as we can now show, there was another solution”, says Igor Asanovic.

The scientists discovered that RTCB co-evolved with PYROXD1 as its sole antioxidative factor. “Most proteins rely on general cellular antioxidative systems”, says Igor Asanovic. “We can now show that this enzyme has a dedicated protector to shield it from inactivation through oxidation”. The researchers suggest that PYROXD1 employs a peculiar mechanism. The main molecule in cellular antioxidative defense is NAD(P)H, but NADP+ is a pro-oxidative factor. When the scientists reconstituted their system in vitro, PYROXD1 converted NAD(P)H to NADP+, which then had an antioxidant effect on RTCB. “How this actually works on an atomic level, however, is still mysterious”, says Igor Asanovic.

It remains to be seen whether the mechanism observed in the test tube operates in the same way in living cells and just how widespread the concept of dedicated protein-based antioxidants is. Studies, however, have implicated mutations in PYROXD1 in human disease and the scientists’ own data show that disease-associated variants of PYROXD1 fail to protect the tRNA ligase. “It was fascinating to me that it was not understood what such an essential protein like PYROXD1 actually does”, says Igor Asanovic. “Our work establishes the first mechanistic link between PYROXD1 and human myopathies. However, further work is required to better understand how, more precisely, the lack of oxidative protection is manifested in the disease state”, he concludes.