A successful "Ubiquitin and Friends" symposium at the Josephinum in Vienna

“The early bird catches the worm.” This was the thought on our minds at 9 a.m. on a rainy Saturday on the 13th of May when members of the Vienna BioCenter convened in Vienna’s 9thdistrict to discuss exciting new research in a historical and scientific setting. 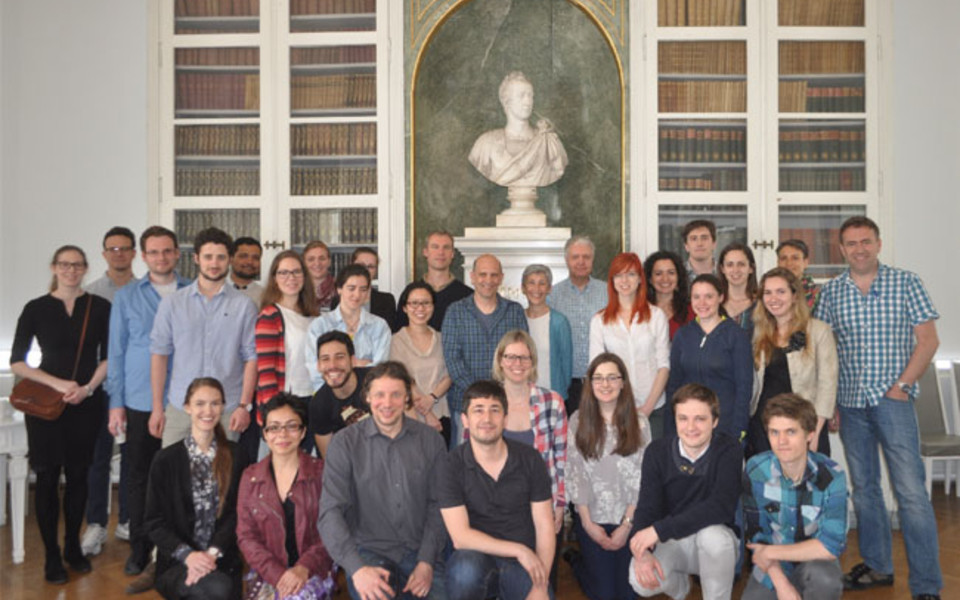 The event in question was the highly anticipated 4th annual "Ubiquitin and Friends" symposium which took place at the Josephinum, a former medical academy founded in 1784 by Emperor Joseph II, in a room decorated with glass cases of leather-bound books on the study of medicine.

This year, all members of the Vienna BioCenter were invited to the "Ubiquitin and Friends" symposium. Approximately 35 people attended, making it a relaxed and comfortable event and not a bad way to spend a Saturday. Attendees ranged from Masters students, PhD students, Post-docs to admired experts in the field. The symposium, like the Ubiquitin club, covered a broad range of topics, ranging from ubiquitin, ubiquitin-like molecules, signaling, autophagy, post-translational modifications, to forms of degradation not mediated by ubiquitination. In the words of one of the distinguished guest speakers at the symposium, Rachel Klevit, “Everyone works on ubiquitination and if you think that you don’t, you just don’t know it yet”.  As the title of our event conveys, Ubiquitin has many friends. Every year, while most of the speakers at the symposium are students and post-docs from the Ubiquitin Club, a special effort is made to invite known experts in the field. This year, we were very happy to welcome two highly distinguished guest speakers, Ami Navon from the Weizmann Institute in Israel and Rachel Klevit from the University of Washington. Ami Navon expertly talked about his lab’s journey to navigate “The regulatory loops within the proteasome ad their structural bases”. Rachel Klevit passionately told us about her latest insights into BRCA1, a RING E3 ligase known to be mutated in cancer and explained to us the “Rules of the game: The last guy holding the Ubiquitin calls the shots”. In addition to this, a last-minute guest speaker was added to the schedule just two days before the event, David Haselbach from the Max Planck Institute in Gӧttingen, who presented beautiful structures of proteasome particles in action, as solved by the continually evolving techniques in cryo-electron microscopy.

Our invited speakers also took up the challenge to select the most exciting student/post-doc talk for the first “Ubiquitin Award”, which included a beautiful trophy and prize money. Unexpectedly, but deservedly so, two winners were chosen, Laura Gallego Valle from Alwin Kӧhler’s group at MFPL for her talk on “Molecular mechanism of chromatin ubiquitination” and Marcin Suskiewicz from Tim Clausen’s group at IMP for his talk on the “Structure and function of the protein arginine kinase McsB”. The atmosphere of the symposium was great throughout the day, and was characterized by very relaxed, communicative, productive, and humorous moments.  Even though a lot of time was allocated for coffee breaks in between the talks, it was not enough to discuss the wonderful science behind each of the talks. The external speakers especially left their mark, as they not only listened to each of the talks, but put a lot of effort into providing constructive advice and asking the right kind of questions. The event concluded on a historic note where attendees stepped into the footsteps of 18th century researchers by visiting the famous anatomic and obstetric wax models of the Josephinum medical collection which were used to educate medical students in the 18th century. Following this, with sunny and warm weather, we enjoyed a nice dinner together at the Stiegl Ambulanz to mark the end of this year’s successful event.  We hope to see you at the 5th "Ubiquitin and Friends" symposium!