The group of Kristina Djinovic-Carugo has revealed the molecular structure of a calcium-regulated form of the protein α-actinin, and has elucidated the mechanism of how calcium binds and regulates it. In α-actinin from the parasite E. histolytica, calcium binding triggers an increase in protein rigidity, which impairs its ability to bundle actin filaments. The study is published in PNAS and could help understand calcium regulation in human forms of α-actinin. The mechanism may also provide guidance for the development of novel therapeutics to treat amoebic dysentery caused by E. histolytica  that threatens millions of people in developing countries every year. 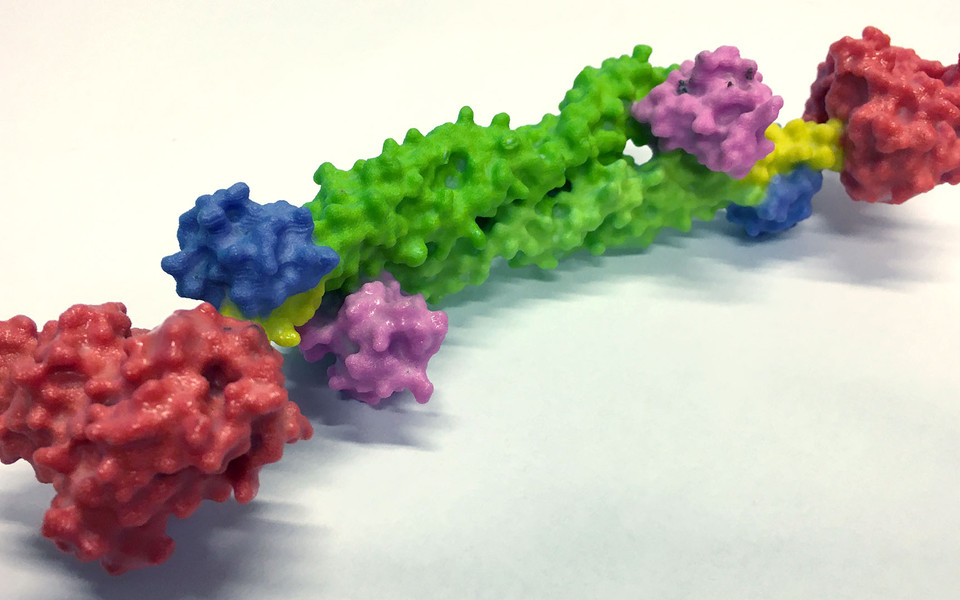 Actin is one of the most abundant proteins in eukaryotic cells, often accounting for up to 10 percent of total protein. In muscles, it helps generate force for movement. In virtually all other cells it is part of the structure that gives cells their shape, helps cells to move, and is also involved in chromosome segregation during cell division. Actin forms filaments that are bundled and cross-linked by α-actinin, an important actin-binding protein. „α-Actinin comes in two ‘flavors’ or isoforms”, explains group leader Kristina Djinovic-Carugo, „one is regulated by PIP2 and is found in muscles. The other form is regulated by calcium.” It was already known that high concentrations of calcium inhibit the ability of non-muscle α-actinin to bundle actin filaments. The mechanism behind this regulation, however, was unclear.

The scientists have now determined the molecular structures of an ancestral α-actinin from the parasite E. histolytica in the presence and absence of calcium by X-ray crystallography. They found that a short section of the protein, the so-called calmodulin-like domain, exhibits a very high affinity for calcium. “Binding of calcium to this domain causes other domains of the protein to rigidify”, explains Kristina Djinovic-Carugo. The individual domains interlock with each other similar to joints. Ultimately, the distal “head” part of α-actinin, which binds to actin filaments, loses its flexibility and so its ability to bundle actin filaments.

Together with their collaborators from the Jawaharlal Nehru University the team of researchers also shows the importance of α-actinin in the survival of the parasite E. histolytica. In order to propagate, the parasite encapsulates other cells or bacteria in tissues of the host organism, a process called phagocytosis. “Mutant E. histolytica α-actinin that can’t bind calcium can’t complete the phagocytotic cycle”, says Kristina Djinovic-Carugo. “α-Actinin therefore might represent a new drug target for amoebic dysentery”. In addition, E. histolytica α-actinin shares a highly similar architecture with human α-actinin. This study may therefore also help to understand α-actinin regulation in higher organisms. In the next step, the scientists hope to determine the structure of a human calcium-regulated α-actinin to better understand the role of calcium in α-actinin regulation.