Mitosis is the process by which the genetic information encoded on chromosomes is equally distributed to two daughter cells, a fundamental feature of all life on earth. Scientists led by Alexander Dammermann at the Max Perutz Labs, a joint venture of the University of Vienna and the Medical University of Vienna, now examine how centrioles contribute to this process. The findings, published in “Developmental Cell”, help to elucidate the function of these tiny cellular structures in mitosis. 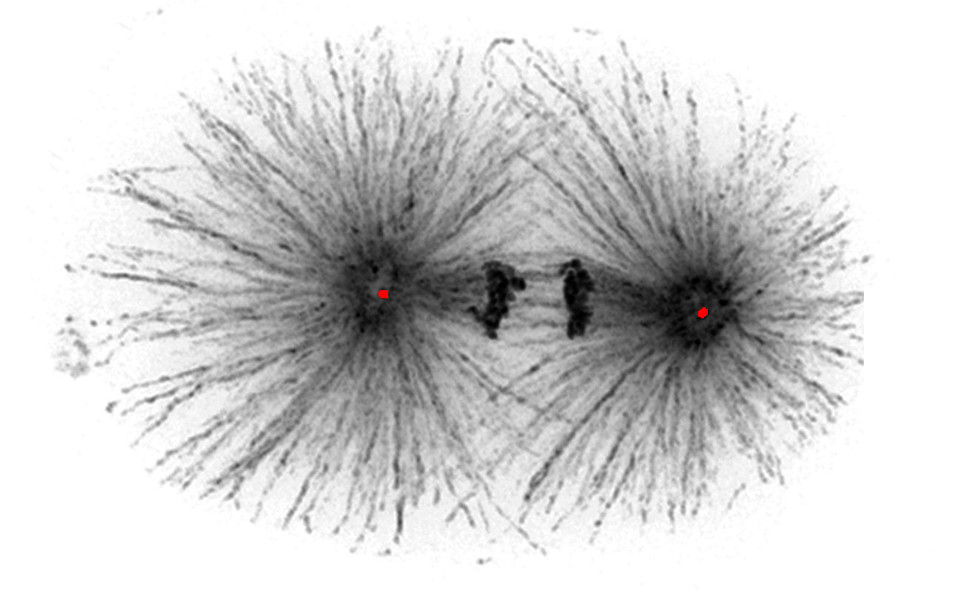 Correct mitosis requires the formation of a filamentous spindle that ensures that chromosomes are separated to opposite ends of the cell. Similar to ropes pulling a heavy weight, the spindle needs an anchor point from where it can develop. This point is provided by centrioles that accumulate a protein meshwork called the pericentriolar material or PCM around them to form centrosomes, which serve as both the origin and attachment site for the filaments of the mitotic spindle.

While it was known that centrioles are essential for the initial formation of the centrosome, their role in further mitotic growth and maintenance of the PCM throughout cell division was previously unclear. The scientists were able to answer these questions with the help of C. elegans, a model organism that has exceptionally large centrosomes. Using laser microsurgery, they were able to remove the centrioles from within the centrosome at different stages of mitosis without destroying the entire structure. “What we found was that centriole ablation did not lead to an immediate collapse of the PCM as we had expected. However, further growth was strongly impaired, revealing a critical role for centrioles in PCM accumulation, and therefore mitotic spindle assembly”, first authors Triin Laos and Gabriela Cabral explain.

Beyond their role in PCM assembly, centrioles were also essential for structural integrity, with acentriolar centrosomes liable to being pulled apart as cells proceeded through mitosis. This finding was particularly remarkable given the small size of centrioles relative to the surrounding PCM. How centrioles could confer structural integrity to a structure >30x larger is not immediately clear. The authors envision that centrioles provide anchor sites for proteins that impart tensile strength to the PCM by acting similar to steel bars in reinforced concrete. By controlling PCM assembly and structural integrity, centrioles then have critical roles throughout cell division. How centrioles perform these apparently disparate functions remains the biggest open question, the authors agree.