The proposed function of the centriolar protein Cep97 has to be revised, a new study from the Dammerman lab shows. Rather than just limiting centriole elongation, Cep97 forms a protective roof that ensures that centrioles maintain their correct size once the proper length is reached. The findings are published in “Current Biology” and could help explain how centrioles maintain their size and stability through multiple cell divisions, often throughout the entire lifetime of an organism. 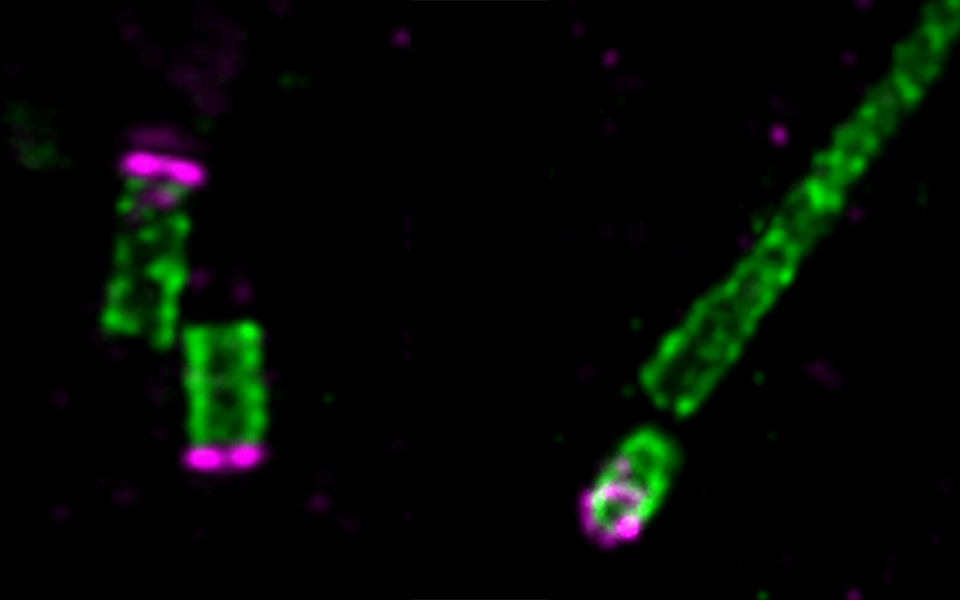 Centrioles are cylindrical organelles that serve as anchor points for the spindle apparatus during mitosis and as the basis for cilia, hair-like structures found on the surface of many cell types. “Unlike other cellular organelles, centrioles have effectively no turnover”, says Jeroen Dobbelaere, a postdoc in the Dammermann lab and first author of the study. “One of each pair of centrioles in the cell is always inherited from the previous generation and the original sperm-derived centrioles can still be found very late in the development of the organism”. How centrioles manage to retain this remarkable stability and consistency in their size has so far been enigmatic. Jeroen Dobbelaere and his co-authors have identified Cep97 as a possible explanation for this phenomenon.

Cep97 was originally described as an inhibitor of cilium growth. Scientists thought that it had to be removed from the tip of the centriole so that it can elongate and cilia can form. In fruit flies, however, the Dammermann lab have observed that Cep97 does not have to be removed in the initial steps of cilium formation. Surprisingly, mutant flies lacking Cep97 could not, in many cases, form proper cilia. “It became obvious that Cep97 cannot merely be an inhibitor of cilium growth - on the contrary, the protein is required for cilium biogenesis”, says group leader Alexander Dammermann.

The researchers showed that Cep97 is recruited to mature centrioles once their proper length is reached. This ensures that the centriole forms a stable base from which cilia can emerge. “It is like constructing a house – once you put the roof on it, the size is defined. Similarly, Cep97 stabilizes centrioles, so that they neither grow nor shrink once the correct length has been reached”, summarizes Alexander Dammermann.

Centrioles primarily consist of a set of protein polymers called microtubules. Tubulin, the basic building block of microtubules, is heavily post-translationally modified in centrioles, a process that affects microtubule turnover, but also regulates microtubule interactions with other proteins. One such modification is protein acetylation, which is thought to stabilize centriolar microtubules. Together with Dea Slade, also a group leader at the Max Perutz Labs, the scientists found that Cep97 interacts with a central player of the acetylation machinery. The authors surmise that: “The key to the remarkable stability of centrioles could lie in the influence of Cep97 on centriolar microtubule acetylation”.