In order to exchange genetic material between parental chromosomes during meiosis, cells need to introduce DNA double strand breaks (DSBs) that are later repaired in a specific manner. Which proteins are necessary and sufficient for this process and how they achieve faithful DSB formation and repair is still poorly understood. The lab of Peter Schlögelhofer and their collaborator Mathilde Grelon from the INRAE (Versailles, France) have systematically investigated the interactions between DSB proteins in the model plant Arabidopsis thaliana. Their work also identified a key protein that links the DSB complex to the DNA repair machinery. The study is published in Nucleic Acids Research. 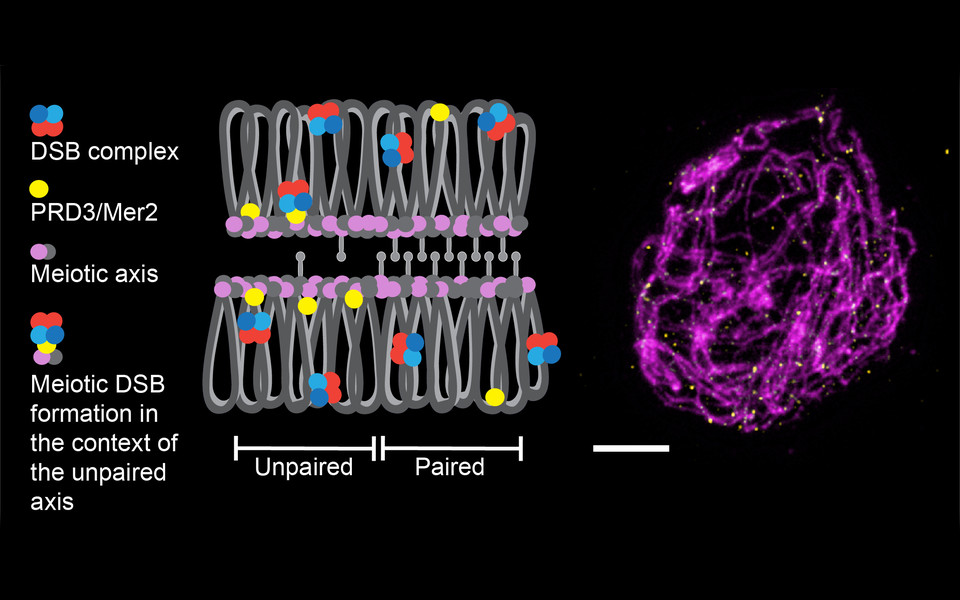 Illustration of the meiotic DNA double strand break (DSB) core complex (composed of SPO11-1 (dark blue), SPO11-2 (light blue) and 2 MTOPVIb proteins (red)) and its localisation at meiotic chromatin. Only once the entire complex, including PRD3/Mer2 (yellow) (and further proteins; not shown), is assembled, DSB formation is promoted. Meiotic DSBs only form in the context of the unpaired axis (magenta/grey). The STED super-resolution image on the right shows spread chromatin (at zygotene stage) of a male meiotic cell taken from the anther of a wild-type Arabidopsis plant. The chromatin axis is stained in magenta (ASY3) and the essential DSB support protein PRD3/Mer2 in yellow. Some parts of the axis are unpaired, some already paired-up with the homologous partner. (c) Schlögelhofer Lab

A key feature of sexually reproducing eukaryotes, the evolutionary origins of meiosis have long puzzled biologists. Are the proteins involved in meiosis related across different species? Is there a kernel of a conserved mechanism from which everything has diverged? Or has convergent evolution achieved the same process with different mechanisms? An important step for meiotic recombination in virtually all eukaryotes is the formation of DSBs that are later repaired but the process hasn’t been fully resolved in any model organism. “There are organisms in which we know the set of players, Arabidopsis thaliana being one of them”, says Peter Schlögelhofer, “but we still don’t fully understand what many of them actually do”. Some of the genes involved in Arabidopsis meiosis have conserved relatives in animals, and, from a technical perspective, the plant has accessible regenerative organs. Chromosomes from meiotic cells can be easily visualized, making A. thaliana a model organism in which to investigate the spatial and temporal distribution of key meiotic proteins.

Peter’s collaborator, Mathilde Grelon, previously performed a genetic screen in Arabidopsis thaliana to identify proteins that are involved in DSB formation. With a comprehensive list of putative factors in hand, the scientists then set out to elucidate their interactions. They systematically examined the interactions not only between DSB forming proteins, but also with downstream repair factors, as well as factors that constitute the meiotic chromatin. Two proteins, MTOPVIB and PRD1, occupy a central position within the DSB network and interact with most of the other factors. The two proteins appear to link the catalytic and regulatory components of the network. The scientists also identified a long-sought link between DSB forming proteins and factors responsible for the repair of the breaks – a protein called PRD3. “It is fascinating that the DSB machinery and the repair kit come in the same package. It will be interesting to elucidate precisely how this is regulated”, says Peter Schlögelhofer.

One factor the scientists examined in the interaction network, called PHS1 (or Rec114), is well conserved. However, they discovered that it does not play an essential role in DSB formation in Arabidopsis. Could this mean that meiosis is the product of convergent evolution? “I still think that there is a single ancestral event that kick-started meiosis. Nevertheless, we have to accept that during evolution, some proteins diverged so far that they cannot be attributed to their original function anymore. This we can now show for at least one of the factors”, says Peter Schlögelhofer. In future studies, the team aims to purify and biochemically characterize the proteins of the DSB network to learn more about their functions.