Transposable elements (TEs) are parasitic DNA sequences that can jump within the host genome and disrupt its normal function. To preserve genome integrity, eukaryotic cells are in an arms race to fight TEs. The main weapon in their arsenal are small RNAs, that silence the transcription of TEs. Paradoxically, to identify and ultimately eliminate TEs, precursors of small RNAs must be transcribed from TEs. Scientists led by Josef Loidl from the Max Perutz Labs now show details of how the organism Tetrahymena thermophilia manages to effectively eliminate TEs from their active genome. The findings are published in the journal “Current Biology”. 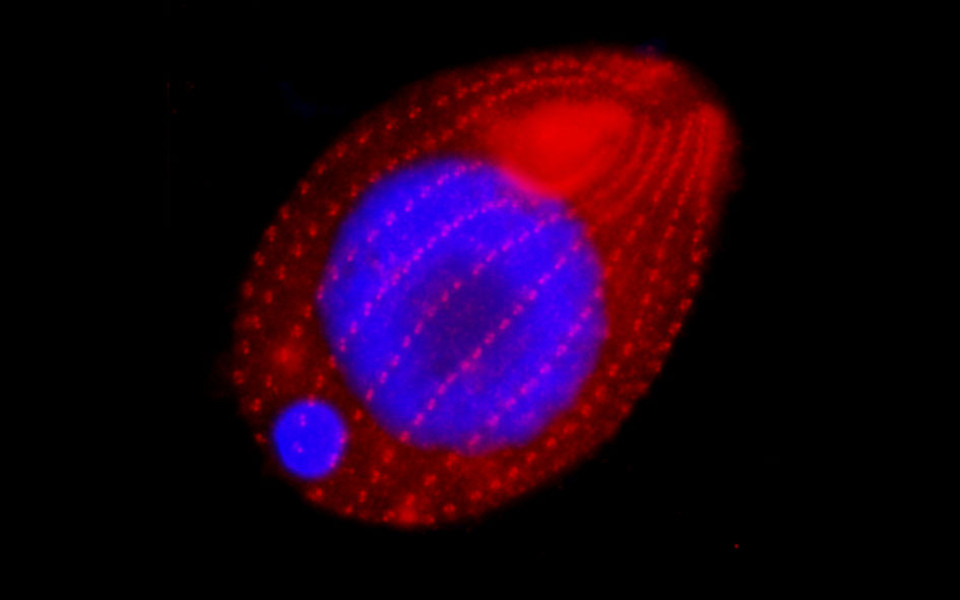 A long-standing question was how Tetrayhmena are able to access the instructions packed in an otherwise silent nucleus. Miao Tian from the group of Josef Loidl and their collaborator from the Institute of Human Genetics in Montpellier (France) now found the “key” to the genetic vault of Tetrahymena, that comes in the form of three mediator complex (Med) associated proteins.

Mediator is a protein complex involved in the communication between two major players of transcription: RNA polymerase and gene-specific transcription factors. During meiosis, two proteins (EMIT1 and EMIT2) tether Med to the silent nucleus, activating the transcriptional players. By doing that, they unlock the genetic “vault” and with the help of another protein (RIB1), position the transcriptional machinery towards the TE-rich regions stored in the germline nucleus.

Transposons and other non-coding DNA are found in the genome of many plants, animals, and humans. They often make up a large part of the DNA. The findings are an example of how organisms evolve ways to protect genome integrity, and illustrate the importance of model organisms for the understanding of fundamental biological processes. Since non-coding RNA production occurs in a transcriptionally prohibitive environment, the finding of specific Med-associated proteins also opens a new avenue of research on transcription regulation.