Hidden in plain sight: A-type lamins in the nucleus

Lamins are structural proteins found at the nuclear periphery, where they regulate the mechanical properties of the nucleus and the organization of genetic material within the nucleus. However, they also play a poorly understood role in the nucleoplasm. New work from the lab of Roland Foisner and their collaborators from the Bar Ilan University (Israel) now shows that binding of A-type lamins in the nuclear interior to a protein called LAP2α regulates their mobility and that of surrounding chromatin. The study is published in e-life. 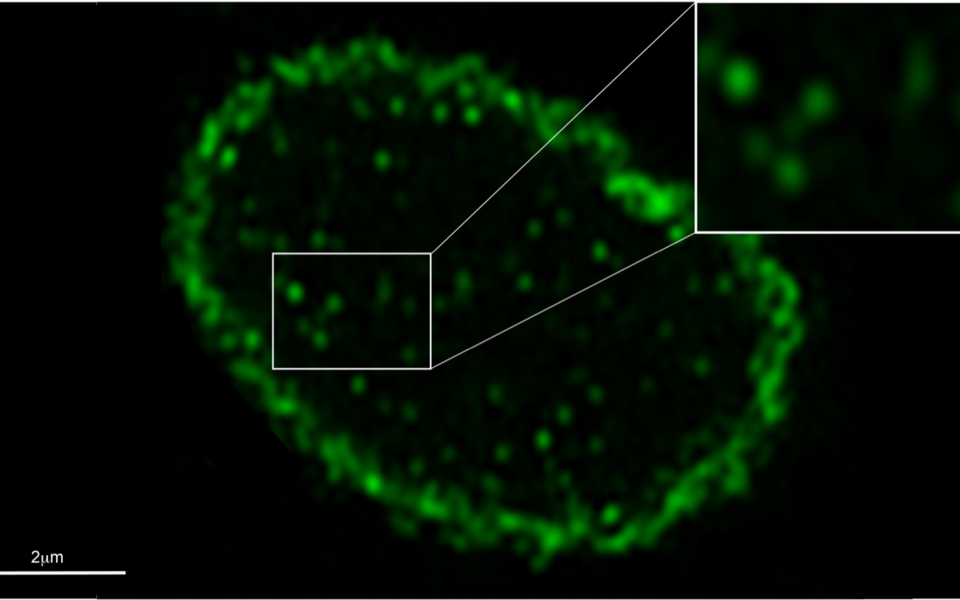 Genetic material is stored in the cell’s nucleus, protected by a double membrane. Beneath the inner nuclear membrane lies the nuclear lamina, a protein meshwork made of lamins that maintains the mechanical stability of the nucleus and anchors heterochromatin. Whereas B-type lamins are tightly linked to the inner nuclear membrane, a fraction of A-type lamins are found in the nuclear interior where they dynamically bind to active chromatin, influencing its mobility and accessibility. “A-type lamins in the nuclear periphery and the nucleoplasm have distinct properties and functions”, says co-first author Nana Naetar-Kerenyi. “How they execute different functions depending on their location in the same cellular compartment has been enigmatic.”

The Foisner lab has previously identified LAP2α as an important binding partner of A-type lamins. Now, the scientists added a fluorescent tag to the gene encoding lamin A. With this approach they could track the expressed protein in live cells using fluorescence microscopy, and for the first time could visualize the temporal evolution of lamins in the nuclear interior. Binding of LAP2α causes the lamins to maintain a low assembly, mobile state. When depleted of LAP2α on the other hand, lamins form stable structures that are more tightly associated with chromatin in the nuclear interior. The researchers could show that it is LAP2α that regulates the mobility and antibody-accessibility of A-type lamins. “This finding was surprising, as in an earlier study we could not detect nucleoplasmic lamins in LAP2α knockout cells, hinting that LAP2α either generates or maintains these lamins”, says Nana Naetar-Kerenyi. The authors believe that the antibody they used to detect the lamins in their previous study could not recognize the more stable, higher order lamins formed in the absence of LAP2α, thus hiding the nucleoplasmic lamins in plain sight.

The physiological relevance of these mobile lamin pool remains poorly understood but the scientists believe that their association with chromatin is intriguing. “It’s becoming more and more clear that in addition to transcription factors, chromatin structure is an additional regulator of processes such as cell differentiation”, says group leader Roland Foisner. The scientists suggest that a dynamic pool of lamins in the nucleoplasm, controlled by LAP2α, may allow the cell to efficiently respond to external and internal cues by increasing or decreasing the mobility of chromatin. Mutations in lamin genes are the cause of several diseases, including the premature aging disease Hutchison-Gifford Progeria Syndome, but most research is focused on peripheral lamins. “By understanding the role of nucleoplasmic lamins in normal cell physiology, it will be easier to rationalise their role in disease”, adds Roland Foisner.