How to detox the nucleus of unsaturated fat

In eukaryotes, the nucleus harbors the genetic information of a cell, protected by a double lipid membrane called the nuclear envelope. The lipid composition of membranes is tightly regulated, thereby controlling its biophysical properties and functionality. In work published in Developmental Cell, Anete Romanauska and Alwin Köhler have discovered a detoxification mechanism that protects the inner nuclear membrane from high concentrations of unsaturated lipids that can alter the viscosity and function of the envelope. They have delineated the mechanism by which excess unsaturated fatty acids are stored in cytoplasmic lipid droplets and thus kept away from the nucleus. 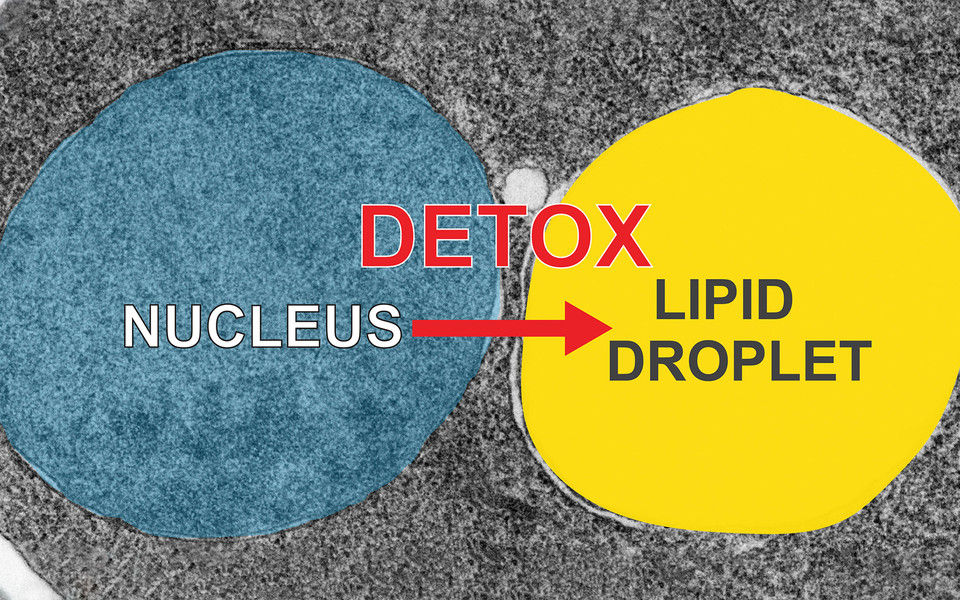 Across all kingdoms of life, membranes determine the boundaries and architecture of cells and subcellular organelles, creating biochemically distinct compartments. Lipids constitute approximately 50% of the mass of cell membranes. Just as an architect chooses the appropriate materials for the different elements of his building based on their intended use, the properties of cellular membranes determine their function. And, like in a building, the properties of these membranes are dictated by the materials used. Saturated lipids, which can pack together more tightly, increase the viscosity of the membrane, whereas unsaturated lipids, whose kinked structure prohibits their tight packing, cause the barrier to become more fluid. Membrane fluidity influences the structure, diffusion, and activity of membrane-embedded or peripherally-associated membrane proteins. As such, the levels of lipid saturation are tightly regulated. The nuclear envelope consists of an inner membrane (INM), and an outer membrane (ONM) that is contiguous with the endoplasmic reticulum (ER). Whereas the mechanism controlling the saturation of the ONM is known, the composition and regulation of the INM has, until recently, been enigmatic.

In previous work, Anete Romanauska and Alwin Köhler characterized the formation of nuclear lipid droplets at the INM. In the cytoplasm, lipid droplets permit the detoxification and storage of excess lipids. “We asked ourselves if, similarly, nuclear lipid droplets could help to keep the lipid saturation of the inner nuclear membrane in balance”, says lead author Anete Romanauska. To test their hypothesis, Anete used the properties of the transmembrane helix of the transcription factor Mga2 to sense lipid saturation. By attaching a fluorescent tag to the helix and directing the protein to the INM, she could visualize the saturation profile of the membrane. Anete then overexpressed genes involved in lipid metabolism to see how they affected the lipid composition of the INM. To their surprise, the scientists did not observe the formation of nuclear lipid droplets. High levels of unsaturated fats were, in fact, disposed of through cytoplasmic lipid droplets formed from the ER and the ONM, whereas nuclear lipid droplet formation was suppressed. This detoxification relies on the reprogramming of two transcriptional circuits and the suppression of seipin and phosphatidic acid at the INM, two important factors in lipid droplet formation. Together, these transcriptional circuits redirect unsaturated lipids away from the INM.

Why excess unsaturated lipids are removed via cytoplasmic lipid droplets and not nuclear lipid droplets remains an open question. “When we increased lipid unsaturation and artificially forced nuclear lipid droplet formation, cell viability decreased”, explains Anete Romanauska. The scientists speculate that flooding the nucleus with excess lipid droplets may interfere with genome function, which is why the nuclear detox of unsaturated fat needs to take place on the cytoplasmic side of the nuclear envelope. Pathological accumulation of nuclear lipid droplets in liver cells has been observed in a mouse-model of non-alcoholic fatty liver disease (NAFLD). These observations raise questions about the role of dysregulated nuclear envelope lipid metabolism in obesity and liver disease, and whether such pathways can be pharmacologically reprogrammed.