Interfering with a greasy decoration is unhealthy for most picornaviruses

Picornaviruses are a group of pathogens that cause a variety of illnesses in humans. An interdisciplinary team of scientists of the Max F. Perutz Laboratories and other institutes, led by group leader Heinrich Kowalski, now report findings that could lead to new ways to cope with infections caused by these viruses. 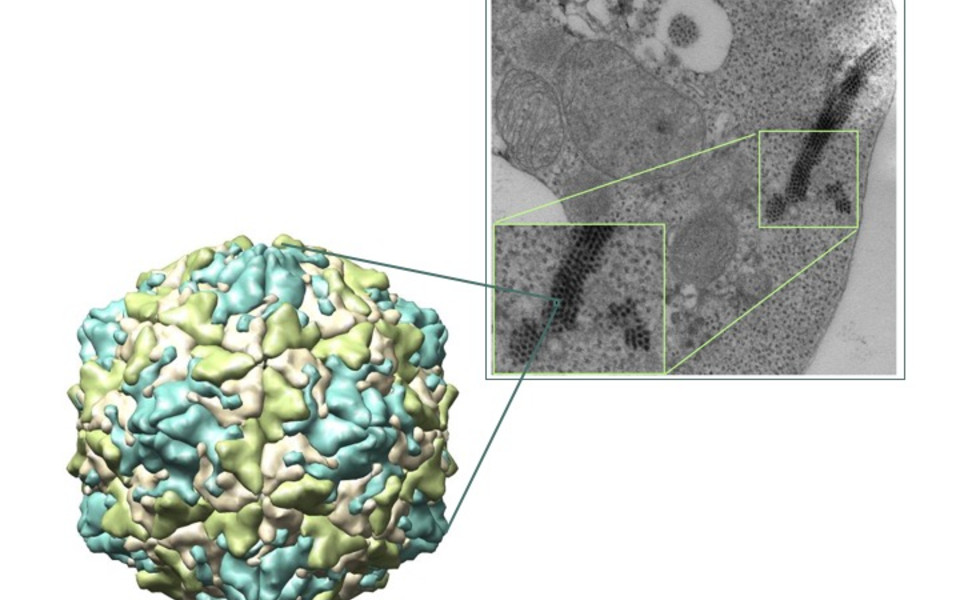 What does a harmless common cold have in common with life-threatening poliomyelitis? Both diseases can be caused by members of the Picornaviridae, a family of small RNA viruses that include many pathogens of global distribution. Only few vaccines are available and currently no antiviral drug has been approved. In a new paper published in the journal PLOS Pathogens scientists from Heinrich Kowalski’s group at MFPL together with colleagues from the Medical University of Vienna, the Technical University of Vienna, the University Hospital Tübingen in Germany, and the biopharmaceutical company Haplogen in Vienna provide important insight in the role of a fatty acid modification in these viruses. The work focuses in particular on coxsackievirus B3 (CVB3), which can trigger acute and chronic inflammation of the heart muscle and may result in death or require heart transplantation.

Picornaviruses consist of a protein shell called the capsid, which encloses and protects a single-stranded ribonucleic acid molecule. Upon invasion of a host cell this RNA genome is released from the virus particle into the cell´s cytosol. It contains all information for virus reproduction including synthesis of the capsid proteins VP0, VP3 and VP1. These assemble around newly produced viral RNA to form provirions. Subsequent cleavage of VP0 into VP2 and VP4 gives rise to infectious virions. In almost all picornaviruses, VP0 and the derived VP4 are modified by attachment of a myristoic acid residue. Elimination of this fatty acid molecule in genetically altered (mutant) viruses was previously found to be detrimental for the virus, but the cause remained unclear.

In their new work, Kowalski and co-workers specifically target the host cell enzymes responsible for this modification, the so-called N-myristoyltransferases (NMTs). Upon applying a NMT inhibitor called DDD85646, a drug originally developed against trypanosomal parasites, the scientists massively reduced VP0/VP4 myristoylation in CVB3. The outcome was striking: viral progeny decreased by about 90% and virus infectivity was vastly reduced. The results prove the importance of myristoylation, as Heinrich Kowalski explains: “Using this entirely different, non-mutagenic approach we were able to demonstrate that preventing myristoylation of a picornavirus capsid protein impacts on a multitude of steps in the virus life cycle, ranging from virion assembly and maturation to uncoating, thereby drastically curtailing virus spread”. Irena Čorbić Ramljak, the first author emphasizes: ”Myristate is a rare fatty acid, constituting only roughly 1% of total fatty acids in the cell. Therefore, the big question was why would a virus go through all the trouble of acquiring it on its capsid protein. Well, the answer is: the virus really needs it!” While this was true for most picornaviruses, the study also found that a few representatives such as the diarrhea-causing Kobuviruses were insensitive to DDD85646, possibly as these do not require maturation of their provirions to become infective.

Getting there was a challenge for the scientists that could only be overcome with effective teamwork. Since the chemical compound was hard to procure, it was synthesized by a team of chemists from the Technical University of Vienna, proving how interdisciplinary work between scientists can yield exciting discoveries. “I enjoyed working on the myristoylation project not only because it is a very interesting research topic, but also because I was surrounded by wonderful people in the lab who were giving me continuous support throughout the project”, Irena Čorbić Ramljak adds.