On September 14th and 15th 2017, the Großer & Kleiner Festsaal of the University of Vienna were the setting of the first joint conference of the four current Vienna Doctoral Schools (VDSs): Cognition, Behaviour and Neuroscience, Mathematics, Molecules of Life and Physics. 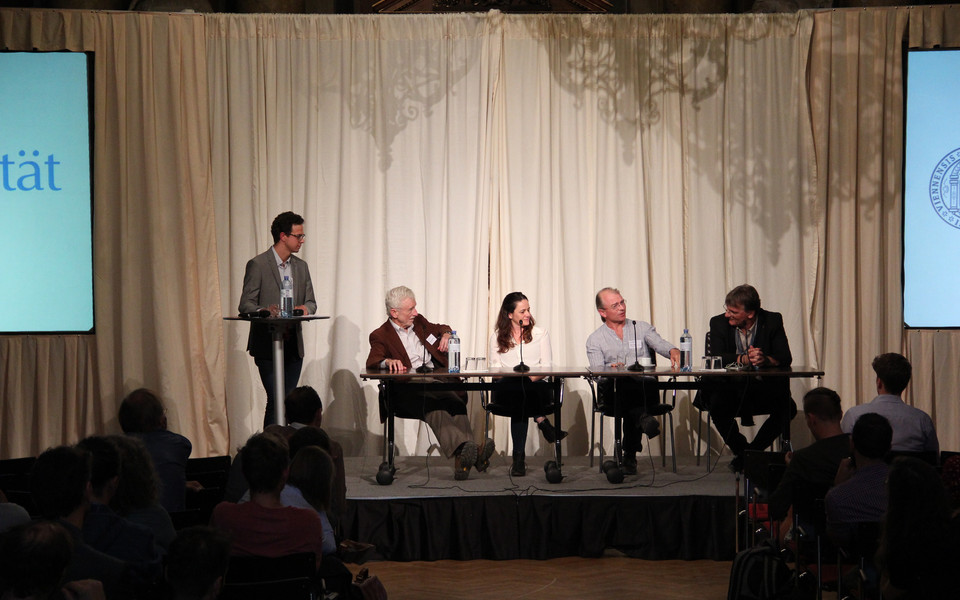 The VDSs are an innovative project of doctoral training at the University of Vienna, aiming to bring together the most committed doctoral candidates and supervisors, in order to enhance the quality of doctoral education in Austria. The VDSs are also intended to promote connections between different fields of science and boost an interdisciplinary, more effective research. This is in recognition of the fact that the most important discoveries and exciting findings come from addressing scientific problems from different perspectives.

The symposium has been a first and very successful attempt of the VDSs to bring together scientists of different areas to promote the exchange of knowledge and techniques.

A warm welcome from the Vice Rector of the University of Vienna, Heinz Fassmann, the Head of the Center of Doctoral Studies, Lucas Zinner, and VDS Molecules of Life (MoL) student representative Amelie Schoenenwald opened the first day of the symposium, immediately followed by the first keynote speaker. Each VDS invited a world-leading scientist in their field, scientists whose research is at the crossroads of different disciplines. Their achievements are a clear example that collaboration and integration of different disciplines are the key to success.

The VDS CoBeNe hosted Prof. Asya Rolls, an assistant professor at Technion – Israel Institute of Technology. Prof. Rolls, whose successful career includes awards such as the Krill Prize for Excellence in Scientific Research, presented her latest major findings on the tight connection between mind and body. In particular, she showed how positive emotional states influence and boost the immune system. These findings can be important for improving therapeutic approaches to pathologies strongly influenced by the immune response or to explain phenomena like the “placebo effect”.

Very different was the talk held by the guest of the VDS Mathematics, Prof. Pierre-Louis Lions of the Collège de France. Prof. Lions is particularly famous for his contribution to the study of nonlinear partial differential equations (PDEs) and other findings relevant for the field of mathematics and physics, and has been awarded the Fields Medal (sometimes called the “Nobel Prize” of Mathematics). Prof. Lions presented his recent theory of mean-field games, a novel class of PDEs, and its potential applications to several real situations, especially in economics.

The guest speaker of the VDS MoL, Prof. Thomas Pollard, is a Professor at Yale and his academic successes include being President of the Salk Institute for Biological Studies. Prof. Pollard's research focuses on the study of the cytoskeleton and the cytokinesis and shows how the combination of molecular biology, high-end microscopy and mathematical models can lead to major discoveries. An example is the new microscopy technique developed by his team, allowing the visualization of the growth of actin filaments in real time.

Prof. Seth Lloyd, invited by the VDS Physics, is the Director of the WM Center for Extreme Quantum Information Theory at Massachusetts Institute of Technology (MIT). Prof. Lloyd focuses on the role of information in physical and mechanical systems, particularly in quantum mechanics. He also proposed the first technologically feasible design of a quantum computer. In his talk, Prof. Lloyd discussed quantum machine learning and specifically the applicability of quantum computers to find patterns in big data, where conventional computers fail. Moreover, he discussed possible applications of the quantum approach to chemistry, finance and other fields.

The symposium also hosted a panel discussion open to the public, led by MoL student Stefan Benke. During the event, the four keynote speakers discussed hot topics such as the necessity to improve communication between scientists and society and the dangers and opportunities of making raw data freely available.

Science, research and innovation are not only hard work but also creativity and fun. To celebrate this, the students of the VDSs staged an impressive science slam. The competition challenged the students to find alternative and artistic ways to present their PhD projects. The competition included the projection of videos, costumes, dancing performances and music. An award ceremony announced the winner of the two “best poster” prizes, the “best talk” prize and the science slam prize, followed by the closing remarks from Prof. Schloegelhofer (the deputy coordinator of the VDS MoL) and Lisa Weiss, a student of the VDS Physics.

“This conference has truly shown that mathematicians, physicists, molecular biologists and scientists studying different aspects of brain function can talk to each other and get excited about each other’s science, and has hopefully sown the seed of future collaborations. Our students gave impressive talks and poster presentations, were perfect as chairpersons and inspiring and funny as science slam participants. It was great to be part of it and we cannot thank the representatives of the PhD students enough, who put together such an interesting and enjoyable program,” says Manuela Baccarini, coordinator and founder of MoL.

In conclusion, although it is clear that the road to a perfect PhD training and research approach is still long and uphill, we can say that, for the VDSs, it had a very promising start.