It takes two to tango: using the ubiquitin fold to turn on secretion

Protein Kinase D (PKD) is an enzyme at the heart of many cellular functions. By modifying other proteins, it controls the trafficking of essential cargo in the sorting center of the cell, the Golgi apparatus. During his PhD in Thomas Leonard’s lab, Daniel Elsner has identified a ubiquitin-like domain in PKD that plays a crucial role in its activation. The findings, published in the Journal of Biological Chemistry, revise our understanding of how the “on-switch” of PKD is wired in the cell. 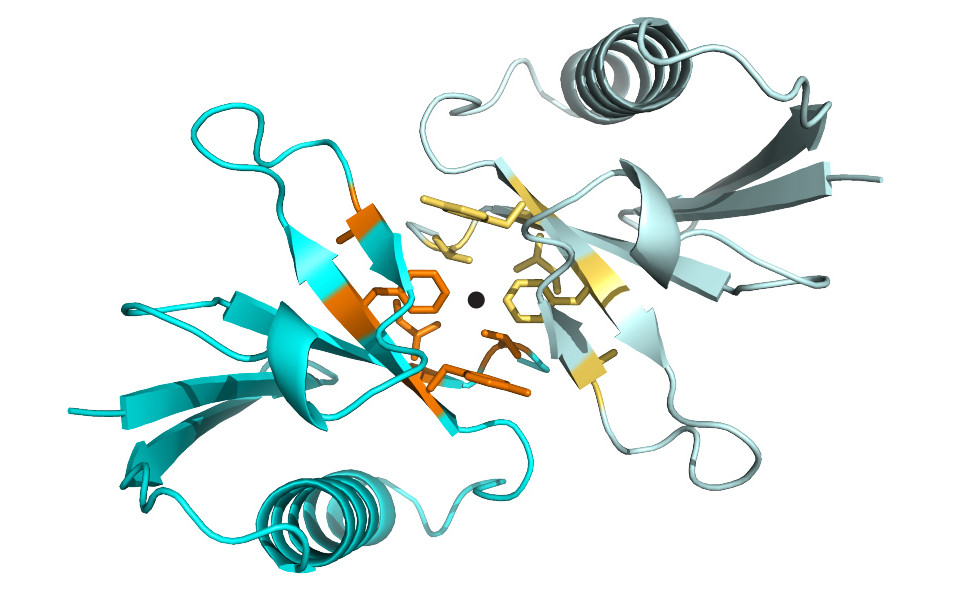 At the heart of protein sorting in the cell, the Golgi apparatus is the organelle that sorts proteins and lipids into vesicles, so that they can be transported to their intra- and extracellular destinations. At the center of this process, PKD regulates the biogenesis of the vesicles used for cargo transportation. Like all protein kinases, PKD adds phosphate groups to its target proteins in a process called phosphorylation. In doing so, it can control their location, activity, or cellular functions. Because of their central role in controlling information flow in the cell, the activity of protein kinases needs to be tightly regulated. Hyperactivation or inactivation can perturb essential cellular processes.

PKD is activated by the lipid diacylglycerol (DAG), a small membrane-embedded molecule that acts as a signal that can be recognized, interpreted, and transduced into work in the cell. While recognition of DAG by PKD is relatively well understood, the mechanism by which it turns on the kinase has been in equal parts mysterious and controversial. One possibility was dimerization-mediated auto-activation, a common mechanism exploited by many eukaryotic kinases in which two copies of the kinase self-associate to modify each other. However, no biochemical or structural evidence supported such a mechanism. Alternatively, another group of protein kinases, of the protein kinase C (PKC) family, was proposed to activate PKD.

The team of Thomas Leonard has now demonstrated that a previously unannotated ubiquitin like domain (ULD) in PKD drives its dimerization. Their report is the first example of the use of a ubiquitin-like domain to mediate homo-dimerization. With this discovery, the scientists have been able to redraw the wiring diagram by which PKD is activated. In their proposed model, PKD is maintained in an inactive conformation in the cell until it is recruited to the membrane by DAG. As a consequence of local concentration, PKD dimerizes with the help of its ubiquitin-like domain. This physical association of two PKD molecules, and not other kinases, then allows PKD to autophosphorylate and thereby propagate the signal. As in the idiom “it takes two to tango”, PKD can only propagate the signal with a partner.

These findings increase the functional repertoire of ubiquitin-like domains as well as provide important mechanistic insight into the activation of PKD. They also have important implications for rationalizing disease-associated mutations, dominant negative effects of, over-expression and, perhaps most importantly, understanding vesicle biogenesis in the secretory pathway.