The differentiation of germline progenitor cells into meiocytes is crucial for the production of healthy gametes. In C. elegans, this step is governed by three post-transcriptional pathways, one of which relies on specific protein degradation mediated by the SCF PROM-1 ubiquitin ligase. In new work published in Science Advances, the lab of Verena Jantsch has identified the protein phosphatase PPM-1.D as a target of PROM-1 and a novel meiotic regulator. The work is a collaboration with the lab of Sebastian Falk at the Max Perutz Labs as well as the lab of Tim Schedl from Washington University School of Medicine and the lab of Yumi Kim from John Hopkins University. 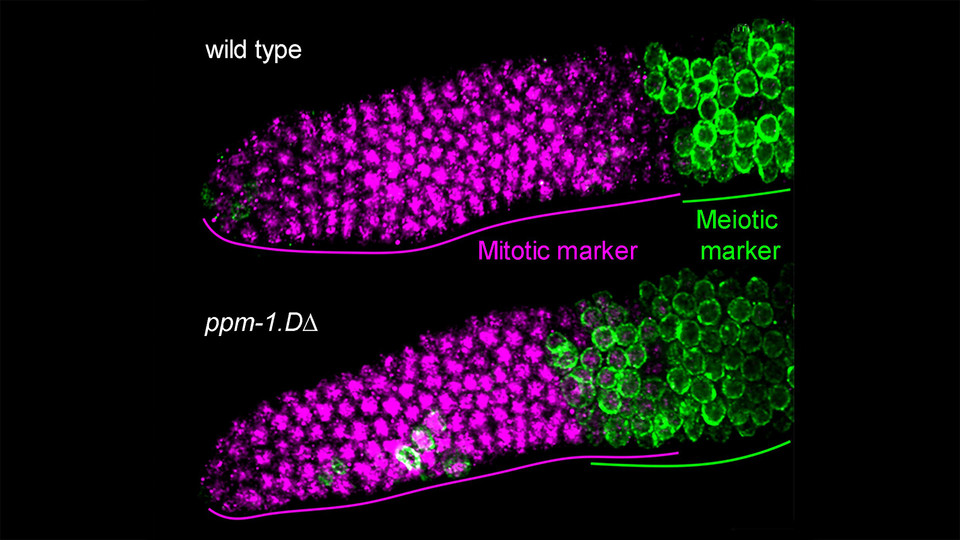 Image shows the distal part of the C. elegans gonad in wild type and the ppm-1-D mutant. CYE-1 (in magenta) marks the progenitor cell zone (which contains stem cells and progenitor cells undergoing mitosis). Phospho-SUN-1 (in green) labels the nuclear envelope after meiotic entry In the wild type the two markers are mutually exclusive, note in ppm-1.D mutants there is an overlap in a couple of cell rows. (c) Baudrimont et.al 2022 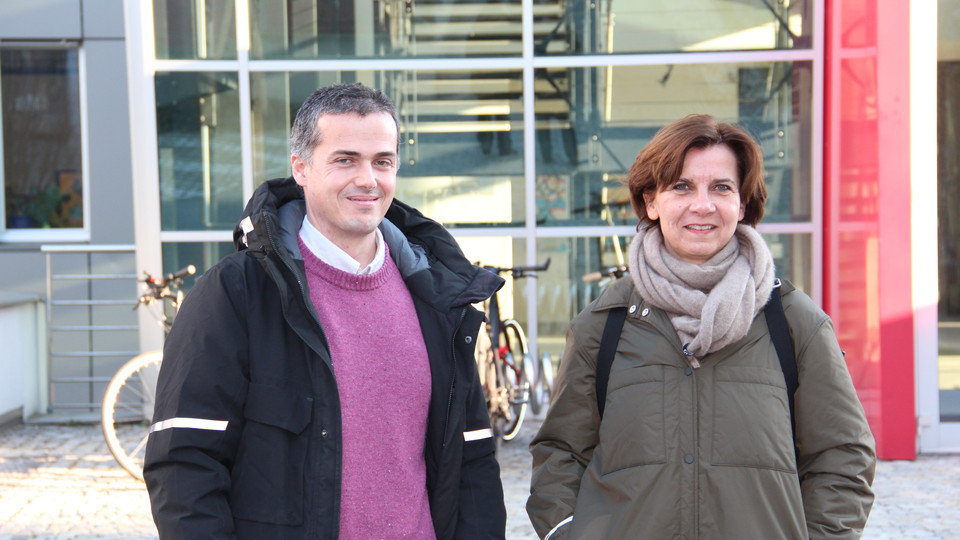 Sexual reproduction relies on the production of maternal (egg) and paternal (sperm) gametes, each containing half the DNA content of their parental cells. Fusion of egg and sperm reconstitutes the full DNA complement required for embryonic development. The production of gametes in the germline is achieved by a highly regulated process called meiosis. Premature or delayed entry into meiosis can compromise the ordered execution of the meiotic program, leading to embryonic lethality. The mechanisms that regulate the timing of meiotic entry are, however, poorly understood. The nematode worm C. elegans has a relatively short life cycle and shares many molecular processes with higher organisms, which makes it an excellent animal model organism to study the basic mechanisms of meiosis.

The Jantsch lab previously observed that C. elegans lacking a component of the targeted protein degradation pathway, PROM-1, showed a delayed entry into meiosis. The team then set out to identify potential targets of PROM-1. “When we knocked out the gene encoding the phosphatase PPM-1.D, we observed that defects in meiotic entry were largely reversed”, explains lead author and Postdoc in the Jantsch Lab, Antoine Baudrimont. “The obvious questions were why and how?”

With the help of the Max Perutz Labs Mass Spectrometry Facility, the scientists identified the cell-cycle checkpoint kinase CHK-2 as an interaction partner of PPM-1.D. CHK-2 is a key regulator of meiotic prophase in C. elegans. By teaming up with the lab of biochemist Sebastian Falk, they were able to confirm and map the interaction in vitro. The team discovered that PPM-1.D regulates entry into meiosis by antagonizing the activity of CHK-2, thus the loss of ppm-1.D leads to unscheduled meiotic entry. However, surprisingly, PPM-1.D does not achieve this via conventional dephosphorylation of CHK-2, but by tethering it at the nuclear periphery. “PPM-1.D sequesters CHK-2 by binding it via its C-terminal domain”, explains Antoine Baudrimont. “When PROM-1 is upregulated, it degrades PPM-1.D, liberating CHK-2 into the nuclear interior and thereby launching the meiotic program.”

PPM-1.D is a conserved phosphatase known to be involved in the DNA damage response. “Our findings establish a novel function for PPM-1.D as a prominent factor regulating the transition from the progenitor cell fate to meiotic entry”, says group leader Verena Jantsch. The team’s findings may also have implications in cancer, since the human homolog of PPM-1.D is frequently observed to be upregulated. “The next step is to find out whether it is also a target for degradation by the human homolog of PROM-1, where next to nothing is known about potential targets”, says Verena Jantsch.