During germ cell development faulty meiocytes are eliminated via apoptosis, a programmed cell death to ensure that only healthy gametes are produced. The lab of Verena Jantsch has now discovered a previously undescribed role for topoisomerase 3 (TOP-3) in oocyte quality control of the model organism C. elegans. In the absence of TOP-3, cells accumulate aberrant recombination intermediates in the pre-meiotic and meiotic compartments of the gonad that are less capable of triggering apoptosis. DNA repair is directed to less accurate pathways, resulting in a pool of oocytes with low quality. The study is published in the Journal of Cell Biology. 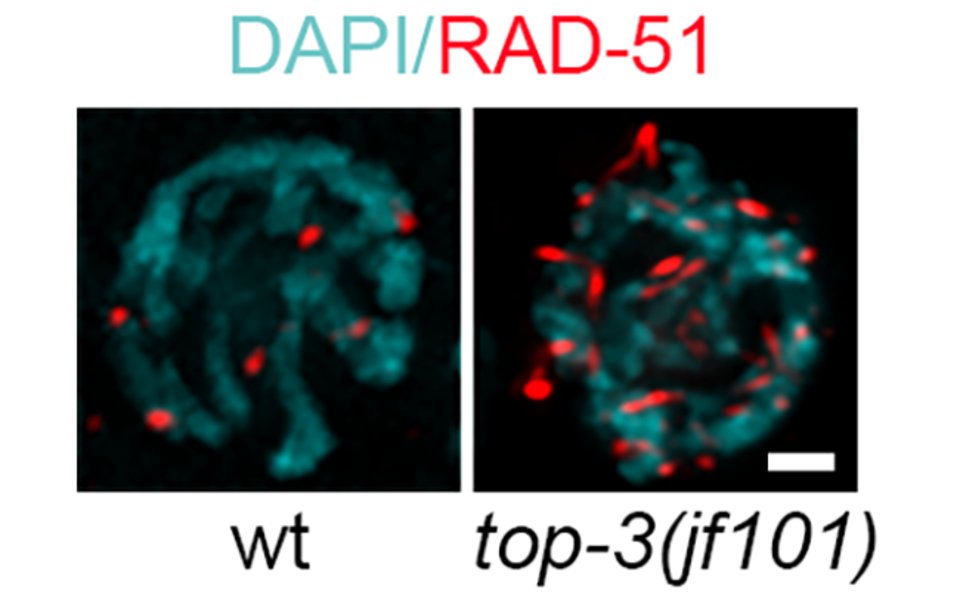 The production of mature female gametes, or oocytes, is key to reproduction and healthy offspring. During maternal meiosis, only a fraction of cells that begin to differentiate into oocytes will reach maturation. In humans, less than 0.006% of the 6-7 million eggs that form during fetal development ovulate and, therefore, have the potential to be fertilized. To ensure a healthy pool of oocytes, cells that have experienced recombination failure are destroyed by apoptosis. The late oocyte attrition in human resembles the C. elegans apoptosis. Important proteins in preventing DNA damage during replication and meiotic recombination are topoisomerases and helicases, enzymes that help to unwind or decatenate entangled DNA strands. “In the lab we created a mutant worm that was missing topoisomerase 3. We expected that the elevated levels of DNA damage in this mutant would lead to very high levels of apoptosis, which they did not”, explains first author Maria Rosaria Dello Stritto.

The scientists found that the absence of topoisomerase 3 leads to the accumulation of faulty recombination intermediates that are, surprisingly, less capable of triggering apoptosis. Topoisomerase 3 can counteract the activity of an enzyme called Bloom helicase. “Uncontrolled Bloom helicase activity seems to direct DNA repair towards other repair pathways not usually employed during meiotic recombination, says Maria Rosaria Dello Stritto. “We believe that this hinders the full execution of the apoptotic program, which is seemingly started but then aborted”. Instead of being accurately repaired, the DNA lesions created during recombination in the mutant worms are repaired with error prone repair pathways that result in chromosomal aberrations such as deletions, translocations or other mutations. These can have a severe detrimental effect on the health of the offspring.

The most accurate repair pathway is homologous recombination, in which TOP-3 has several established roles. The scientists suggest that topoisomerase 3 likely ensures that the DNA ends that arise from double strand breaks in early meiosis are repaired via homologous recombination. “Overall, we establish a role of TOP-3 in meiosis even earlier than it was previously reported”, says Maria Rosaria Dello Stritto. The work has implications for human fertility, where similar oocyte attrition mechanisms are found. Infertility and miscarriages are often the result of aneuploidy and persisting DNA damage. “It is extremely important that the few oocytes that make it through development are healthy”, says group leader Verena Jantsch. “We can now show that the absence of TOP-3 during recombination in the germline makes DNA intermediates more prone to be repaired via non-homologous end joining, which is intrinsically inaccurate, with obvious implications for the quality of the oocyte.”