A marvel of complexity, the nucleus is the command center of the cell – harboring information, codes and controlled access. But different from man-made command centers, the nuclear interior looks chaotic to the eye of a scientist. Chromosomes, the carriers of genetic information, float amidst a sea of water, proteins, nucleic acids and other molecules, all engaged in a myriad of simultaneous reactions. These reactions have one major goal: to turn genes on and off at the right time and place. This process is called gene regulation and makes a brain cell look and act different from a muscle cell or a liver cell. 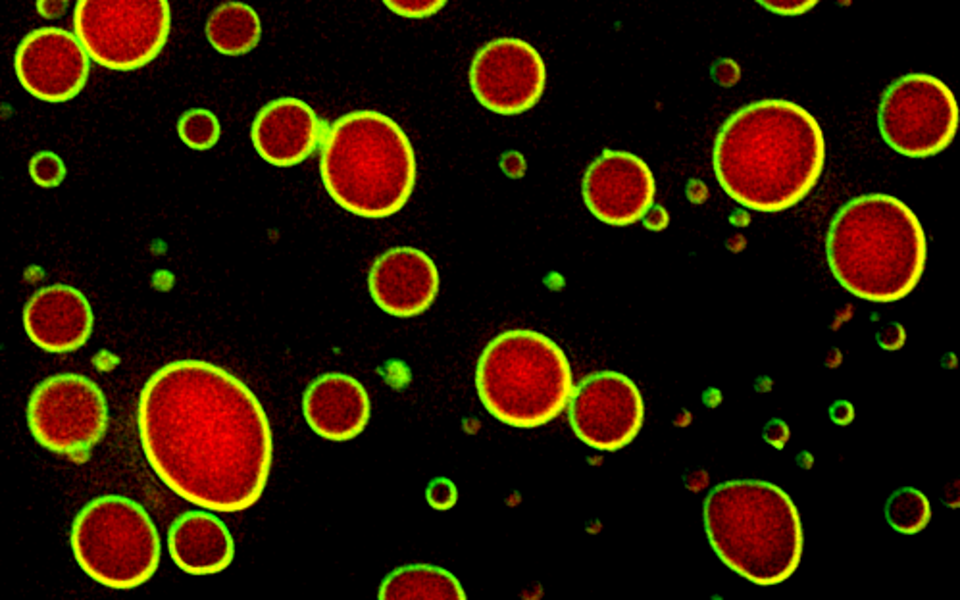 A key question in biology is how this works, put differently, how specific proteins become concentrated on a specific gene to turn it on and off. Scientists, who try to painstakingly dissect such ‘genetic switches’, would wish for a simple device that is easy to understand – a mechanical switch with a button to press. However, nature found a different solution and, surprisingly, the solution is - liquid.

Lge1 droplets, the researchers realized, were not rigid structures, rather, they behaved like oil droplets in a bottle of forcefully shaken vinaigrette, first dispersing, then quickly fusing and blending into larger liquid blobs. This process is an established concept in chemistry, engineering and physics, called liquid–liquid phase separation. It occurs whenever a force pushes two liquids apart, as when oil floats on top of water. When Alwin Köhler and his team added Bre1, something else striking happened: Instead of diffusing into the Lge1 droplet, Bre1 formed an enzymatic shell around Lge1, organizing the droplet into a layered liquid and controlling its growth. Interestingly, the Lge1-Bre1 droplets also attracted chromatin and another enzyme that acts as co-factor for Bre1. This raised the important question whether droplet formation might accelerate the entire enzymatic reaction – and indeed it did. “Looking at that band on the western blot coming up faster was an exciting moment in the dark room” says Maren Schneider, co-first author of the study. The scientists realized that liquid-liquid phase separation provided a way of concentrating the reactants of a genetic switch in the crowded chaos of the nucleus, basically forming a crucible to speed up the reaction on chromatin. Moving from test tubes into cells, the researchers found, together with their collaborators (Chitvan Mittal, co-first author, and Frank Pugh; Penn State, USA), that Lge1 and Bre1 were specifically concentrated on highly expressed genes. Moreover, through yet-unknown mechanisms, Lge1-Bre1 droplets preferred the middle portion of a gene, the so-called gene body, while excluding the upstream or downstream regions. Abolishing Lge1-Bre1’s ability to behave like a layered liquid by genetic manipulation caused growth defects in cells underscoring the importance of this material state in gene regulation.

“Working with budding yeast as a model organism gave us unprecedented access to manipulating and understanding the chemistry that allows layered liquids to function in the nucleus” says Alwin Köhler, who lead the study. “And we also realized a potential link to human disease”. Lge1 has a functional counterpart in humans, called WAC. This protein also behaves like a liquid and when mutated causes DeSanto–Shinawi syndrome, a neurodevelopmental disorder. Thus, being in a liquid state or not might have direct implications for human pathology. So how different are man-made structures and nature’s ingenuity in the end? To quote the architect Frank Gehry: “Liquid architecture. It's like jazz - you improvise, you work together, you play off each other, you make something, they make something.”