Luis Miguel Cerron Alvan and Helena Bragulat Teixidor have been selected as the first Max Perutz PhD Fellows. The program was established earlier this year with the goal to reward the most ambitious and innovative PhD projects at the institute. 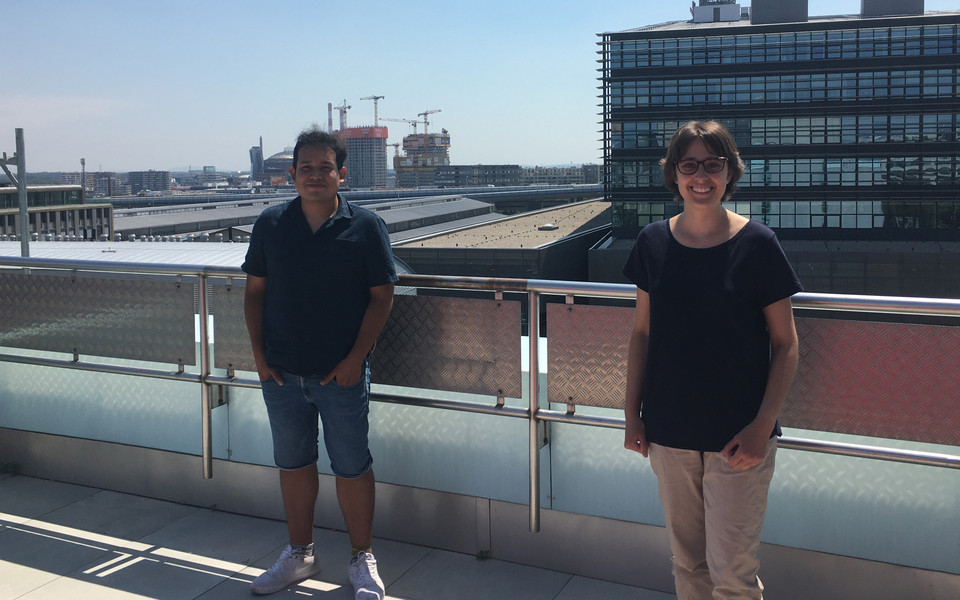 Luis is a second year PhD student in the lab of Martin Leeb, where he studies the molecular control of cell fate transitions. “My lab has previously identified a set of genes that have a potential role in controlling the exit from naïve pluripotency”, he says. “In my project I will elucidate the actual function of these genes in this cell state transition which can be either to stabilize the naïve pluripotency gene regulatory network or to promote cell differentiation”. Luis will follow a CRISPR/Cas9-based approach he learned during his Master’s studies. This approach uses a mutated version of the Cas9 protein that lacks the ability to cut DNA but retains the ability to target specific sequences. “We can fuse this dCas9 protein to activators and repressors, enabling them to be targeted to specific sequences in the genome. This way I can up- and downregulate my genes of interest to elucidate novel gene functionalities in the naïve gene regulatory network”, he explains. Luis studied Biotechnology for his bachelor degree in Lima, Peru. Later, he moved to Munich, Germany for his Master’s at the Ludwig Maximilian University.

Helena Bragulat Teixidor joined the Max Perutz Labs in 2019, where she is now a PhD student in the group of Shotaro Otsuka. The Otsuka lab is focused on inter-organelle communication between the endoplasmic reticulum and the nucleus. The connectivity between the two organelles is essential for cellular homeostasis – in particular, it supplies new lipids and membrane proteins to the nucleus during cell growth. “The morphology of the connections and which proteins remodel them during the cell cycle is not known”, says Helena. She aims to visualize these contact sites at high resolution with cutting-edge 3D electron microscopy. “As a cell biologist, I think it’s an amazing opportunity to be able to study a subcellular structure that has not been investigated in detail before”, she says. Helena is from Spain and studied Biology at the University of Girona. She did her Master’s at the University of Heidelberg (Germany).