Meiosis is a specialized cell division process required to generate gametes, the reproductive cells of an organism. During meiosis, paternal and maternal chromosomes duplicate, pair, and exchange parts of their DNA in a process called meiotic recombination. In order to mediate this exchange of genetic material, cells introduce double strand breaks (DSBs) into their chromosomal DNA. Scientists from the lab of Franz Klein from the Department of Chromosome Biology at the Max Perutz Labs, a joint venture of the University of Vienna and the Medical University of Vienna, have now discovered that cells sometimes liberate DNA fragments at sites of paired, or double, DSBs. Whilst this presents an obvious risk of germline mutations as a consequence of erroneous repair or of integration of fragments from elsewhere at break sites, it may also be a source of evolutionary diversity. The study is published as a research article in Nature. 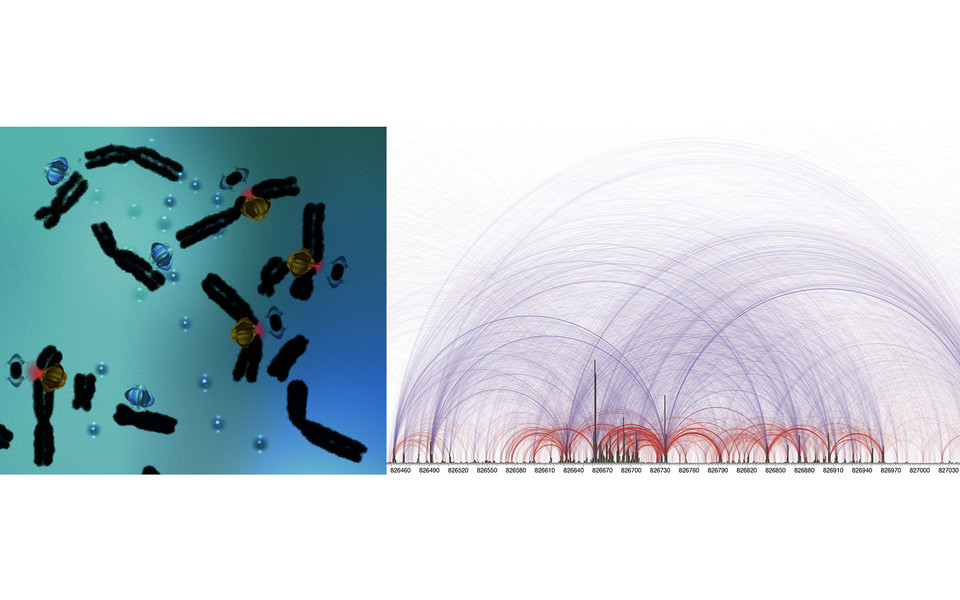 The left panel corresponds to an artistic collage, showing Spo11-complexes (blue and yellow shapes) that cleave pieces out of chromosomes (shown in black). Red halos depict DNA-damage signalling. Liberated pieces carry a part of the Spo11-complex on each end. The right panel shows observed chromosomal break sites at a meiotic recombination hotspot. Each arc labels start and end of an isolated fragment coming from a different cell. Wild-type fragments are in red, fragments from a mutant that doesn’t degrade longer fragments, are in blue. (c) Franz Klein, Chromosomenbiologie, Universität Wien

Genetic information in humans is encoded in 23 chromosome pairs, where one pair consists of two slightly different copies or homologs. One is inherited from the father and one from the mother. Human gametes, however, are haploid - they start out with only half the number of chromosomes. When gametes fuse during sexual reproduction they create an organism with the full set of chromosomes. The random assortment of parental chromosomes together with the exchange of genetic material between homologous chromosomes during early meiosis, account for genetic diversity in the offspring.

Each human gamete contains one of billions of possible combinations of the genetic information they inherit from their parental cells. Sexually reproducing organisms take a high risk to achieve this diversity. To initiate meiotic recombination, cells introduce hundreds of dangerous DNA DSBs in chromosomes with an enzyme called Spo11-complex. By using the homologous copy as a template, the breaks are repaired and genetic information is exchanged between chromosomes. “Cells have been observed to keep double strand breaks far apart from one another”, explains group leader Franz Klein. “However, rather surprisingly, we have now discovered that approximately 20% of breaks correspond to closely positioned pairs of DSBs, that punch out entire pieces of the chromosome. These gaps can also initiate recombination, something that has not been considered before.”

The team led by molecular biologist Dr. Silvia Prieler and bioinformatician Dr. Doris Chen mapped the liberated fragments across the entire yeast genome with single nucleotide precision, better than DSBs had ever been mapped before. This precision led to several new observations, for instance that DNA may have to be bent during the cleavage reaction. They also found that sites where DNA is frequently under high topological stress are cleaved more efficiently. During transcription, the two DNA strands are separated to allow RNA production. This causes the DNA-strands on both sides of the transcription-bubble to be over- or underwound and generates considerable physical strain. This kind of topological strain is resolved by so-called topoisomerases, to which the Spo11-complex is closely related. A key question, therefore, is why a topoisomerase-relative initiates meiotic recombination, given that the cell has dedicated nucleases that could cleave the DNA. “The goal in meiosis is to provide chances for novel genetic combination on as many sites as possible, to combine even closely spaced parental alleles”, says Franz Klein. “Our study provides a hint as to why Spo11 may be so suitable to initiate meiotic recombination: instead of recognizing specific DNA sequences, which would recombine chromosomes always at predetermined positions, it recognizes stressed DNA, something that can occur at any sequence that is frequently used.”

Why cells undergo the risk to punch out chromosome pieces is still unclear. The gaps and their corresponding fragments pose an enhanced risk for mutations, caused by deletions or by the insertion of fragments in irregular positions. The scientists show that although these pairs of double strand breaks are spread across the genome, they often correspond with promoter regions that are especially prone to topological stress. Promoters are genetic elements that regulate the level of transcription. “Evolutionarily, it would be great to be able to exchange functional regulatory elements between different sites in the genome. This raises the intriguing possibility that meiotic gaps at double DSBs could stimulate the evolution of control elements in the genome”, concludes Franz Klein. A risky business for a single cell, no doubt, but perhaps worth the risk for the species.