Scientists in Vienna discover two distinct roles for the molecule UNC-45 in keeping muscle proteins in the right shape: on its own it steers the assembly of a muscle protein; in conjunction with a partner it triggers the degradation of severely damaged muscle proteins. The findings, reported in Nature Communications, may help to better understand muscular diseases. 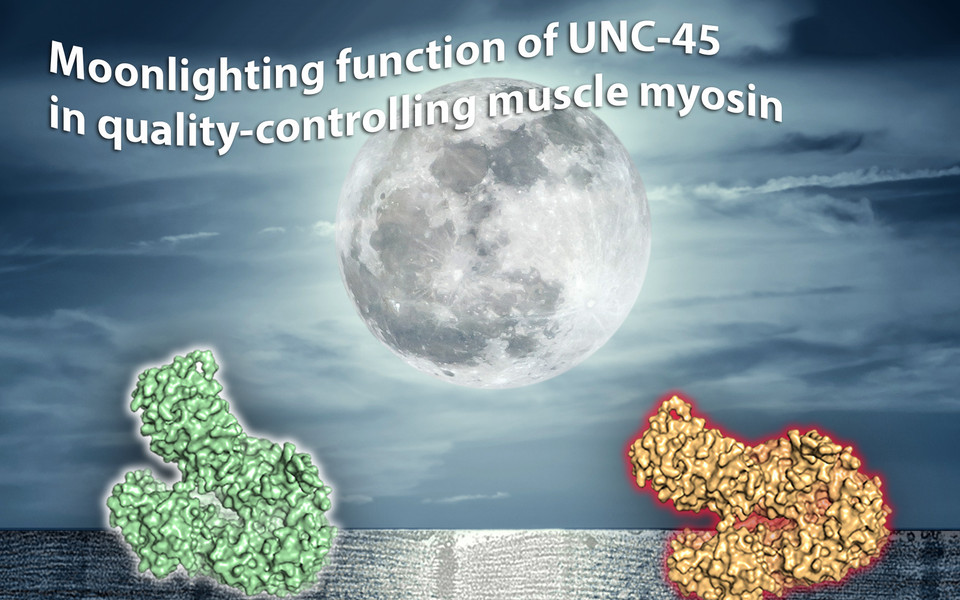 UNC-45 is a "moonlighting" chaperone fulfilling distinct roles in quality-controlling muscle proteins. As a "good" chaperone (green), it promotes the maturation of myosin molecules, as a "bad" chaperone (orange) it supports the degradation of damaged molecules. Image ©IMP

Quality control is important – not only in manufacturing, but also for cells that are constantly producing proteins. The cellular quality-control network assists proteins in maintaining their proper fold and full functionality, keeping the amounts of damaged, aggregation-prone molecules at a minimum. To this end, molecular chaperones help proteins reach their native state, while dedicated protease machines eliminate non-functional proteins that cannot be repaired.

In muscle cells, for example, the motor protein myosin needs to fold properly and assemble into filaments to eventually mediate muscle contraction. The UNC-45 protein plays a key role in this process. UNC-45 forms the core of a myosin assembly line allowing various cellular chaperones to work side-by-side when putting myosin filaments together. In a study published in Nature Communications, the groups of Tim Clausen (Research Institute of Molecular Pathology) and Alexander Dammermann (Max F. Perutz Laboratories, a joint venture of the University of Vienna and Medical University of Vienna) now show that the UNC-45 chaperone also participates in the degradation of myosin.

The scientists demonstrate a common wisdom known from daily life: it all depends on the partner in crime. Depending on its teammate, UNC-45 can fulfill dual roles when quality-controlling muscle proteins - an ambiguity that in the protein world is referred to as “moonlighting” function. Normally, UNC-45 collaborates with general chaperones to promote myosin maturation. The current study now shows that UNC-45 also has a “dark” side. The myosin chaperone can team up with the UFD-2 ubiquitin ligase, a component of the protein degradation system in the cell, marking client proteins for degradation by the proteasome. Dammermann explains: “Using the nematode worm C. elegans as a model system, we show that UFD-2 is not required for the regulation of UNC-45 levels, as had previously been proposed. Instead, the UFD-2 ligase appears to target unfolded peptide stretches of damaged proteins, explaining its vital role in the protein-quality-control system”.

Most strikingly, the authors show that the UNC-45 chaperone is not a substrate, but rather a co-factor of UFD-2. “Without doubt”, Clausen points out, “the discovered death-tagging system, in which a degradation enzyme utilizes a specific molecular chaperone as Substrate Positioning System, has exciting implications for how to find and deal with problematic proteins in the cell.” Both UNC-45 and UFD-2 are known to be critical for muscle development and function in mammals. The scientists therefore believe that the described function in the quality-control of muscle proteins may help to understand protein misfolding defects connected with skeletal and cardiac muscle diseases.