New molecular mechanisms of a class of anti-cancer drugs discovered

Poly(ADP-ribose) polymerases (PARPs) regulate a great diversity of cellular processes, among them DNA repair, transcription, mitosis and cell fate, making them attractive targets in cancer therapy. PARP inhibitors, agents that block the activity of PARPs, have been undergoing multiple clinical trials in recent years. One of these inhibitors, olaparib, has eventually been approved as therapy for BRCA-mutated ovarian cancer in the US and the EU in 2014. However, the molecular mechanisms of PARP inhibitors have not been fully understood. 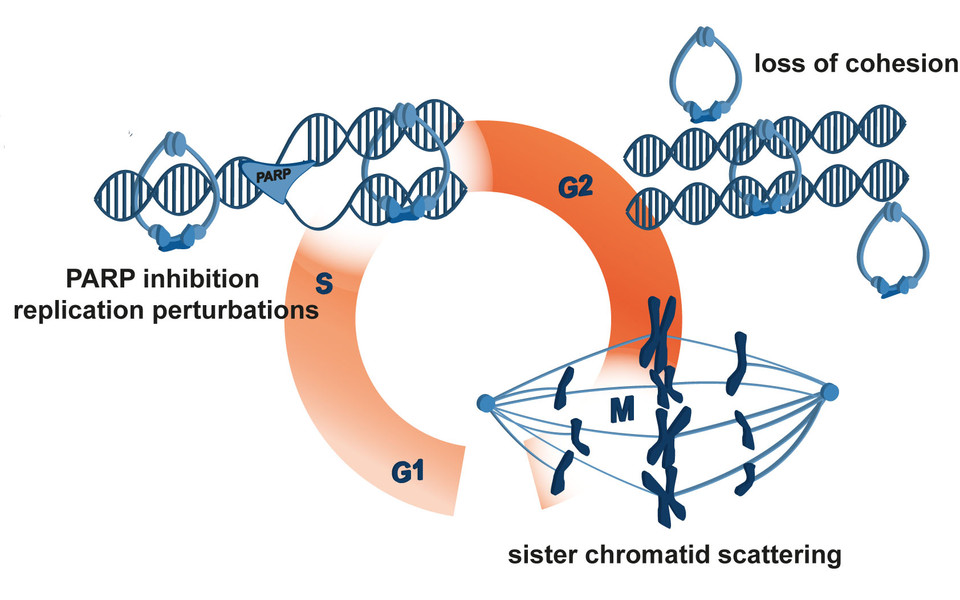 MFPL scientist Dea Slade and colleagues from the Medical University of Vienna and IMBA have now reported their identification of a new mode of action of PARP inhibitors in killing tumor cells in the journal Oncotarget. Using live-cell imaging, the team investigated the progression of mitosis in cancerous cervical, ovary, breast and osteosarcoma cells, as well as in cells of non-cancer origin. They found that olaparib disturbed mitosis and thus interfered with proper cell division by scattering sister chromatids in metaphase, eventually resulting in cell death. The scientists revealed that this mitotic scattering is caused by the loss of sister chromatid cohesion in interphase - the phase of the cell cycle, in which the cell replicates its DNA and prepares for mitosis. Moreover, PARP trapping at replication forks rather than catalytic inhibition is the mechanism of olaparib-induced mitotic failure.

"We found that mitotic chromatid scattering is more pronounced in cancer cell lines with higher PARP1 and PARP2 expression levels, suggesting that PARP1 and PARP2 protein levels could be used as predictive biomarkers for the therapeutic efficiency of olaparib treatment. Olaparib is currently undergoing various clinical trials, including different gynecological malignancies, such as cervical and uterine cancer, where such biomarkers may be particularly useful”, says Eva Kukolj, first author of the study. Based on these findings, the team extended their analysis to clinically relevant DNA-damaging agents that disturb DNA replication – hydroxyurea, cisplatin and topoisomerase inhibitors – and again observed sister chromatid scattering, suggesting that death by mitotic failure is a general outcome of replication problems. “What remains unclear is how olaparib entrapment of PARP at replication forks impairs sister chromatid cohesion: is this merely a physical obstruction phenomenon?”, asks Dea Slade – a question she and her team will attempt to answer in future studies.