No centrioles? No problem!

Centrioles are surrounded by a dense meshwork of proteins called the pericentriolar material (PCM), which together form centrosomes, the main microtubule-organizing centers of the cell. Alexander Dammermann’s group has discovered that centrosomes persist without centrioles in post-mitotic neurons of C. elegans. Key components of the PCM are expressed and incorporated into these centrosomes independent of centrioles and known mitotic regulators. The study, published in Current Biology, suggests that the assembly and maintenance of mitotic and non-mitotic centrosomes may be different. 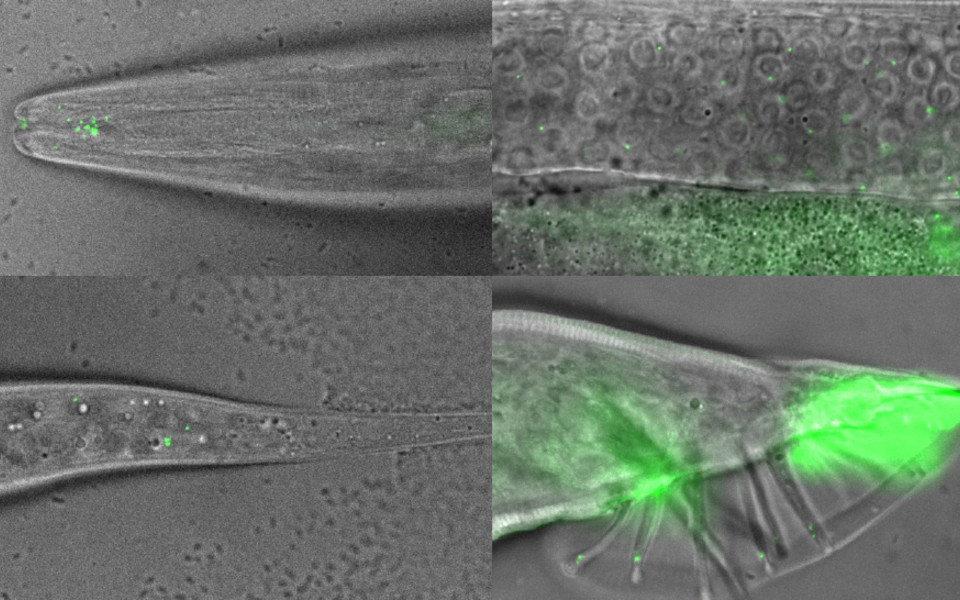 The centrosome scaffolding protein forms foci at the ciliary base of sensory neurons in the head and tail of the nematode worm C. elegans. Unlike centrosomes in the germline and early embryo, those PCM accumulations are not built around the core organizing structure of the centrioles. (c) Adapted from Garbrecht, Laos et al., Curr Biol 2021

Centrioles are cylindrical organelles that are one of the defining elements of eukaryotes. The older, mother centriole is essential for the formation of cilia. These hair-like projections on the surface of cells are important for locomotion and environment sensing. As part of another cellular structure, the centrosome, two centrioles arranged at right angles to each other provide a platform for the recruitment of key components of the PCM. In dividing cells, the microtubules of the spindle apparatus are nucleated in this dense cloud of proteins during mitosis. A key component of the mitotic PCM is a protein called SPD-5 that forms a polymeric scaffold around centrioles in a process promoted by polo-like kinase 1 (PLK1). Whether the same mechanisms of PCM formation also apply to centrosomes in terminally differentiated cells is, however, poorly understood.

In ciliated neurons of the worm C. elegans, centrioles degenerate soon after cells complete their terminal division and cilia are formed. First authors Joachim Garbrecht and Triin Laos now show that, in these neurons, the centrosome persists and in fact continues to grow in the absence of centrioles and detectable levels of PLK1. In proliferating cells, centrioles are the hubs for assembly of the PCM. In differentiated neurons of C. elegans, however, SPD-5 self-assembles and is anchored to the ciliary base by a protein called PCMD-1, which appears to be recruited by SPD-5 itself. “In essence, we have discovered a positive feedback loop whereby one protein recruits the other in the absence of the nucleating structure that gave rise to the organelle in the first place”, explains group leader Alexander Dammermann. The scientists conclude that there appear to be distinct mechanisms of PCM assembly in mitotic and non-mitotic cells, with only the former requiring PLK1.

Pericentriolar material is also found elsewhere in the cell in other differentiated cell types. For example, PCM proteins including the microtubule nucleator γ-tubulin have been observed at the nuclear envelope in muscle and the apical cell cortex in intestinal epithelial cells. “We believe that PCMD-1, and its human ortholog pericentrin, may have similar functions in other cellular contexts, whereby they anchor the pericentriolar material and redirect microtubule organizing capacity to different cellular locations”, says Alexander Dammermann. Having recently been awarded a project grant by the FWF, the lab will continue to investigate the assembly and function of centrosomes in other differentiated cell types with a view to understanding the functional roles of non-canonical microtubule organizing centers in controlling cellular morphology.