PETISCO - a multi-tool for piRNA processing

Piwi-interacting RNAs (piRNAs) are essential to repress transposable elements in the animal germline. In the nematode worm C. elegans, piRNA biogenesis requires a protein complex called PETISCO, but exactly what PETISCO does and how it works is poorly understood. The group of Sebastian Falk and their collaborators now provide unique insights into the molecular details of piRNA processing in C. elegans. PETISCO also has a second, unknown function in embryogenesis, which is dependent on the binding of a different accessory protein. The work resolves the question of how one protein complex can fulfill two different functions and is expected to help elucidate the elusive role of PETISCO in early development. The study is published in Genes & Development. 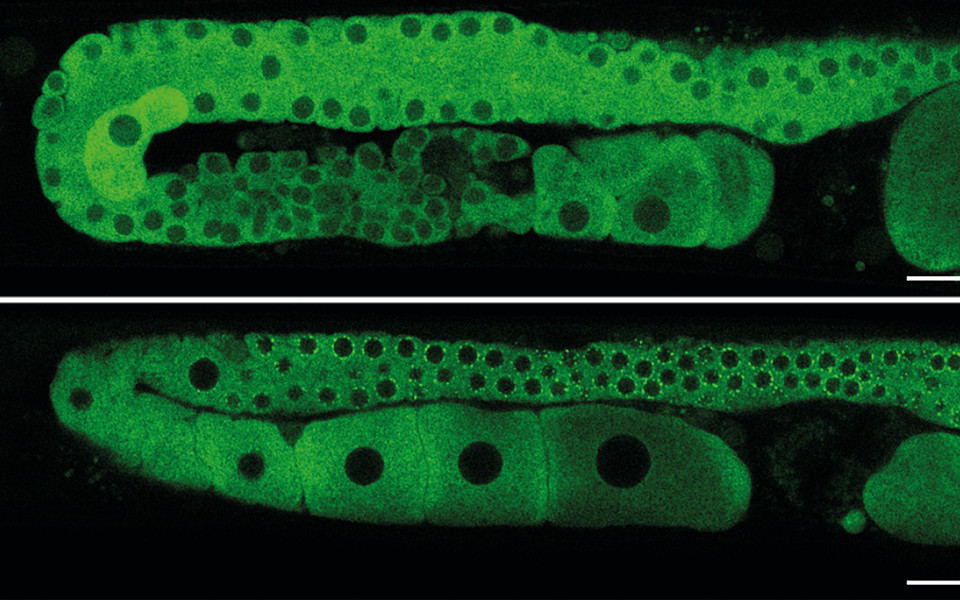 Compared to other organisms, the genome of eukaryotes is enormous. However, of the roughly 3 billion base pairs that make up the human genome, only 1-2% encode genes. The vast majority of the genome is not used to make proteins. Scattered within the previously designated ‘junk DNA’ are transposable elements, genetic remnants from evolution and parts of retroviruses that inserted their genetic code into the human genome millennia ago. Because transposons can catalyze their own relocation within the genome, they have the potential to introduce mutations, posing a danger to genomic integrity. Cells have therefore evolved mechanisms to control transposable elements. “This is especially important in the germline, where any mutation will be passed on to future generations”, explains group leader Sebastian Falk.

In the germline, piRNAs bind to Piwi argonaute proteins to repress transposable elements and maintain germline stability. Like other RNA molecules, piRNAs require post-transcriptional processing before they become fully functional, but the mechanistic details of piRNA processing are poorly understood. Using a suite of biophysical and structural tools together with in vivo studies, the researchers and their collaborators (René Ketting, Institute of Molecular Biology, Germany and Janosch Hennig, European Molecular Biology Laboratory, Germany), have characterized the architecture of the PETISCO complex and how it interacts with its effectors in the nematode C. elegans.

The researchers focused on a piRNA processing complex the Ketting lab discovered in 2019, called PETISCO. They reconstituted PETISCO from purified components, demonstrating that one element in the complex, ERH-2, serves as an interaction hub for two mutually exclusive effector proteins. Depending on which protein is bound, the complex can either fulfill one biological role or another, explaining how the PETISCO toolkit can fulfill two different functions.

The scientists now aim to further characterize the function of PETISCO in piRNA processing and to identify the nuclease that cooperates with PETISCO to process the 5’ ends of the piRNAs. The second function of PETISCO, however, still remains elusive. “We have hints that it may also be to do with RNA metabolism”, says study leader Sebastian Falk. “Since we now know the precise binding sites of the effector proteins, we will conduct targeted experiments to elucidate the evolutionary older function of PETISCO in early embryogenesis.”