Putting a Lid on Multidrug Resistance

Multidrug resistance (MDR) is a fundamentally important medical phenomenon that undermines anticancer and anti-infective therapy of cancer or infectious diseases. Researchers of the Max Perutz Labs, a joint venture by the Medical University of Vienna and the University of Vienna, have delineated the molecular mechanism, whereby the human ABCG2 drug transporter drives MDR. The results suggest new therapeutic strategies to prevent MDR by inhibiting the ABCG2 transporter. 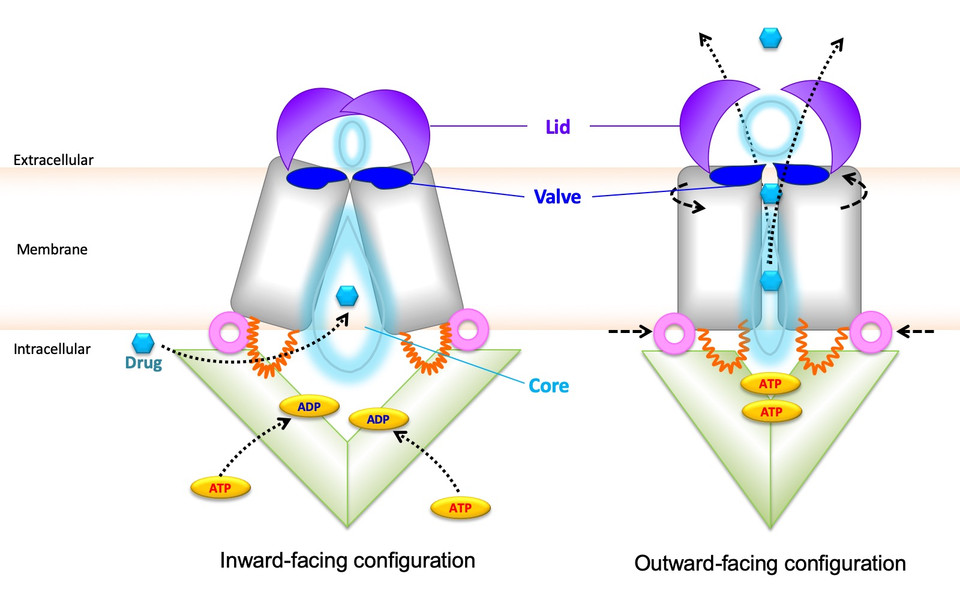 A major evolutionary conserved mechanism driving MDR phenomena is the activation of membrane proteins of the so-called ABC transporter protein family. For example, the ABCG2 transporter mediates the cellular expulsion of many drugs, thus rendering tumor cells or infectious pathogens resistant to treatment, eventually leading to therapeutic failure. MDR has been a major clinical concern, also because it has been dramatically increasing over the past years. Hence, new therapeutic approaches are needed to evade MDR and to restore efficient drug treatments.

The molecular mechanism by which ABC membrane transporters operate, have remained ill-posed for many years. This has been hampering the development of drugs that would avoid MDR. Importantly, human ABC transporters such as ABCG2 also play essential physiological roles in the detoxification of unwanted toxic compounds, metabolites or environmental toxins from liver, breast, placenta, intestine or blood brain barrier tissues. Blocking of Multidrug Resistance aims to restore high intracellular drug concentrations to ensure therapeutic responses. However, a complete MDR inhibition is likely to suffer from severe side effects and increased drug toxicity, since physiological detoxification is not working properly. The research group of Karl Kuchler at the Max Perutz Labs Vienna exploited an interdisciplinary cooperation with the computational biologist Thomas Stockner from the Medical University of Vienna, to delineate the mechanism by which the human ABCG2 transporter mediates MDR.

The study in Nature Communications reveals that the three-dimensional shape of ABCG2 looks like a peristaltic pump that contains a sealed but flexible valve separating two cavities in the transporter core. Both cavities are connected by a central channel, through which drugs are expelled from the inside to the outside of cells across the cell surface. Importantly, the opening of the valve and drug extrusion is controlled by a lid-like roof that covers the top of the ABCG2 pump. The groups used computational models in combination with experimental testing of genetically altered ABCG2 variants, to show how the lid controls valve opening during drug transport. The communicating cavities of alternating sizes form a central channel to enable drug transport out of cells. Moreover, the study identifies the dynamic interplay of regions within the ABCG2 roof, which are also critical for drug recognition and export. Hence, ABCG2 is a peristaltic pump that operates in a repetitive cycle that is fueled by cellular energy.

Remarkably, several amino acid residues that are essential for ABCG2 pump function are located in the lid and in the valve, suggesting that these residues could be amenable to developing novel drugs or antibodies that can partially block detrimental MDR phenotypes to ABCG2 activities observed. The first author of the study, Narakorn Khunweeraphong, is excited about the scope of the results: “It is so thrilling that we now better understand the mechanisms ABCG2 uses to cause MDR”. Karl Kuchler adds: “The knowledge about dynamic structural changes in ABCG2 may pave the way to develop novel immunological therapeutics that enable a specific and partial block of ABCG2 to activity levels observed in normal cells, without compromising physiological detoxification”.