Shedding light on the brakes of Akt activity

Changes leading to the hyperactivation of the protein kinase Akt are observed in almost 50% of all human tumors. Understanding Akt’s regulatory mechanisms is therefore essential for developing and improving cancer therapies. Researchers from the Max F. Perutz Laboratories, a joint venture of the University of Vienna and Medical University of Vienna, propose a completely new model of Akt regulation, limiting its activity to discrete locations within the cell – cellular membranes. The results are published in the journal Molecular Cell. 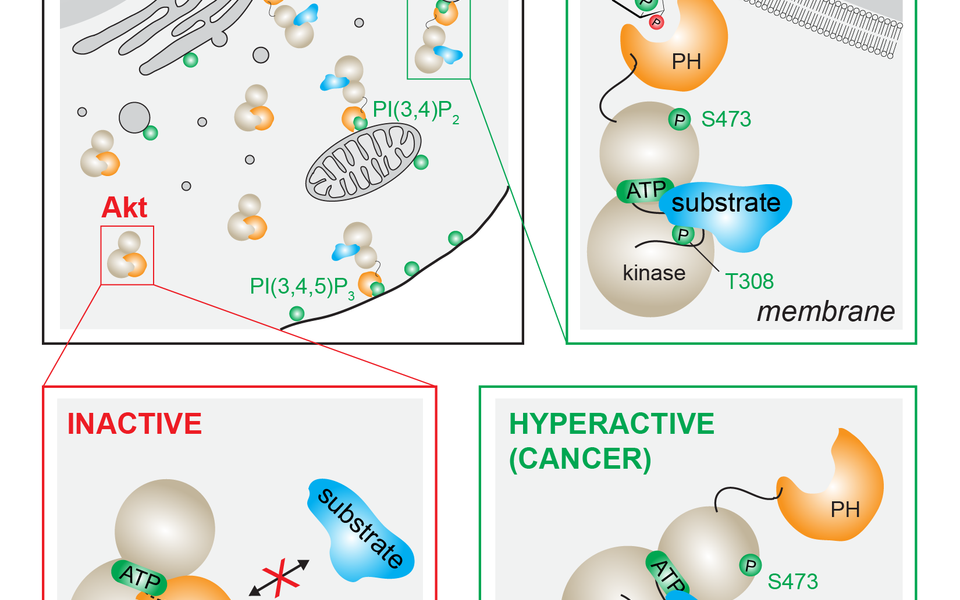 In cells, Akt is active only while bound to membrane-embedded lipids PI(3,4,5)P3 and PI(3,4)P2. A cancer-associated mutation causes uncontrolled Akt activity, independent of membrane binding. ©Thomas Leonard/Medical University of Vienna

Human cancers can arise due to many different factors, both from outside the organism or inside the cell itself. One protein that is oftentimes found to be affected by these factors and involved in the majority of cancers, is called Akt/Protein Kinase B. Akt plays a central role in cellular processes involving growth, survival, and proliferation in response to external stimuli.

The overactivation - or hyperactivation - of Akt is one of the most frequent changes in human cancer, and is observed in about 50% of tumors, helping cells to grow and divide uncontrollably. Its pivotal role in contributing to the delicate balance between the normal cellular functions and tumor formation makes Akt a primary subject of in-depth studies, as the understanding of how its activity is regulated can help lay the first brick in the development and improvement of cancer therapies.

Once activated, Akt in turn activates its targets inside the cell via the addition of a phosphate – a process called phosphorylation. To avoid hyperactivation, as observed in many cancer cells, the activity of Akt inside the cell needs to be tightly controlled and remain proportional to the external signals – similar to a car’s gas pedal. Here, the outcome (speed) has to be proportional to the external input (the foot applying pressure on the pedal). The teams of Thomas Leonard and Ivan Yudushkin investigated the mechanisms ensuring that Akt does not go into overdrive.

“In our study, we have discovered that Akt is only active while bound to a small molecule on cell membranes called PIP3. Engagement of PIP3 allows Akt to bind and phosphorylate its targets and also protects Akt from being deactivated by other proteins in the cell, called phosphatases”, co-first author Iva Lučić explains. “Conversely, when Akt is not bound to PIP3, it remains inactive”. The levels of PIP3 therefore act as a gatekeeper to Akt’s activity, being the pressure on the gas pedal in the aforementioned analogy. In addition to its proportional activation, Akt activity must also be locally confined, as an activated Akt phosphorylating targets indiscriminately would be detrimental to the cell’s health – just as a car speeding off without the driver behind the wheel is likely to cause an accident.

The researchers were able to demonstrate, for the first time, that active Akt is confined to cellular membranes. When “floating” freely inside the cell, Akt is inactivated and unable to phosphorylate any targets. Co-first author Michael Ebner further explains: “When looking in cells, we found that active Akt is essentially a membrane-bound molecule. This means that while it is not bound to PIP3, Akt is shut off in two ways: firstly, when it falls off the membrane, it adopts a structure that prevents it from binding its targets. Secondly, Akt is inactivated by phosphatases, acting as efficient brakes on Akt activity. Strikingly, both mechanisms are compromised by a cancer mutation, which puts Akt into overdrive and makes it active throughout the cell independent of PIP3. Such unrestricted activity of Akt uncouples survival, growth and division of cells from growth factor signals, which can ultimately result in tumor formation”.
These results were corroborated by experiments both in test tubes and inside live cells.

As a next step, the researchers intend to dig deeper and answer more questions about Akt’s activation on an atomic level. Additionally, they will address the question of how this newly discovered activation mechanism allows Akt to select its specific targets inside a cell.