The protein kinase Ataxia-telangiectasia mutated (ATM) is at the heart of the cellular response to DNA double-strand breaks (DSBs). Using super-resolution microscopy, the lab of Peter Schlögelhofer has explored the impact of ATM depletion during multiple steps of meiosis in the model plant Arabidopsis thaliana at unprecedented resolution. Organisms lacking ATM exhibit a loss of fertility associated with a failure to correctly repair DSBs. The findings, published in The Plant Cell, describe previously unrecognized influences of ATM on the structure of meiotic chromosomes. 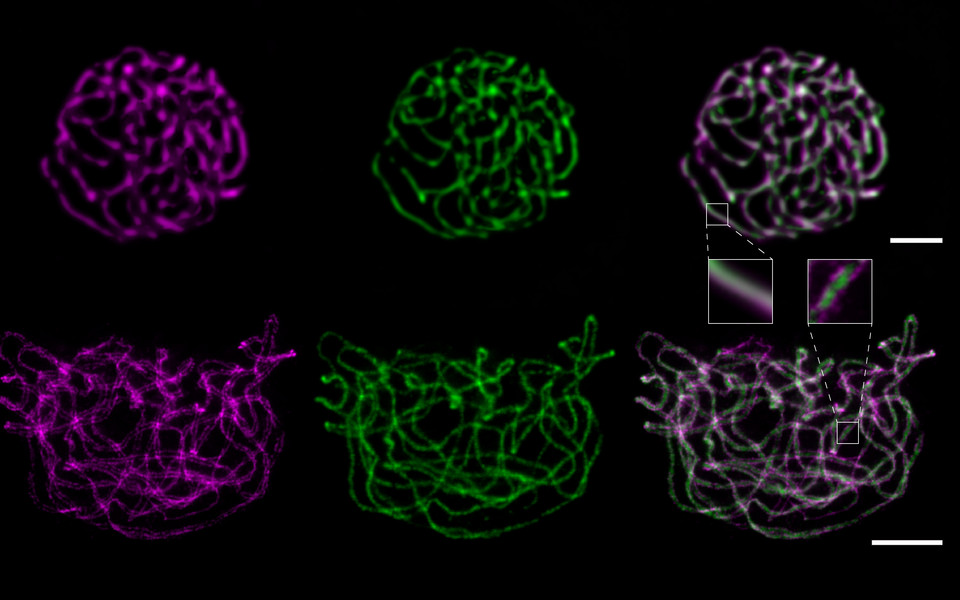 ATM kinase derives its name from the human disease Ataxia-telangiectasia, in which a faulty copy of ATM was found to be the underlying cause. The disorder is characterized by genetic instability, infertility, and a high predisposition to cancer. ATM is key to the cellular response to DNA damage. Activated by DSBs, ATM phosphorylates several key proteins that trigger cell cycle arrest, DNA repair or programmed cell death. Unsurprisingly, ATM has also been shown to be important in meiosis, in which carefully orchestrated DSBs are necessary to permit the exchange of genetic material between maternal and paternal chromosomes during gamete formation. Previous research in mice and yeast has demonstrated that ATM controls the number and spacing of DSBs and meiotic crossover events.

Making use of the super-resolution STED microscopes available in the Max Perutz Labs BioOptics Facility, the scientists now paint a more detailed picture of ATM’s involvement in meiosis in A. thaliana. They could confirm that ATM is required for successful DNA repair in Arabidopsis and discovered a previously unknown impact of ATM on chromosome structure. In the absence of ATM, chromosomes are longer, DNA loops are shorter and the synaptonemal complex, a protein scaffold that links homologous chromosomes from end to end, is wider. “Compared to other organisms, Arabidopsis thaliana has relatively small chromosomes”, explains first author of the study Marie-Therese Kurzbauer. “Without super-resolution microscopy, visualizing the structural changes would not have been possible”. The lab also developed a single-molecule total internal reflection fluorescence (TIRF) microscopy assay to quantify meiotic DNA breaks, which allowed them to quantify the increase in the number of DSBs in cells lacking ATM.

The study marks the first effort to map the effects of ATM on all steps of meiosis using super-resolution microscopy and next-generation sequencing. “With new technologies come new insights”, says group leader Peter Schlögelhofer. “We can now show that ATM is not just an emergency signal in the DNA damage response but has an intrinsic physiological role in plant gametogenesis.”