Signaling in bacteria: How the cell envelope controls gene expression in bacteria

Bacteria need to be able to quickly adapt to changing environments – this is an absolute requirement for their survival. Adaptation often includes changes in the cell envelope, which protects the bacteria from their oftentimes hostile environment as it provides a barrier for harmful compounds including many antibiotics. 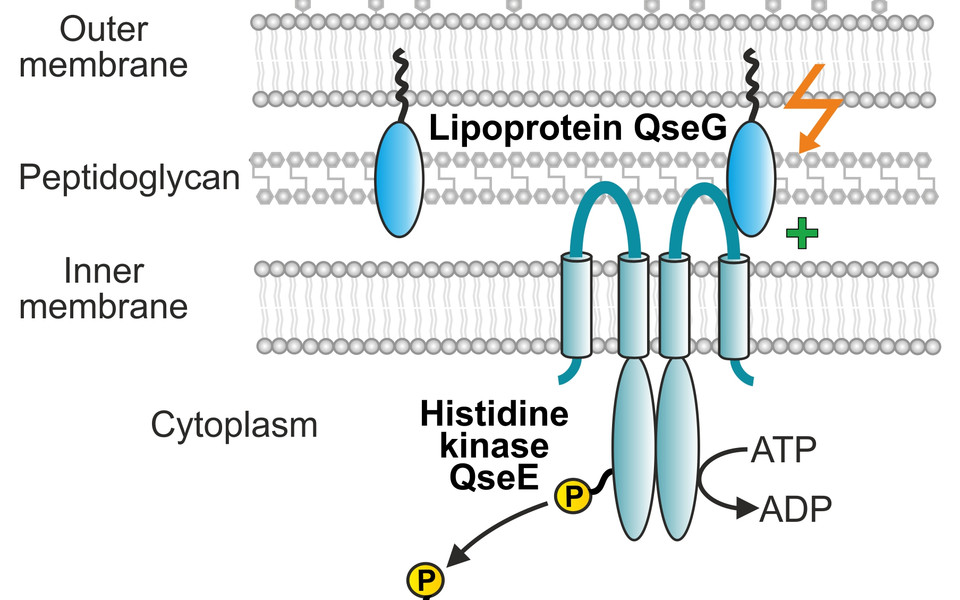 This applies in particular to the group of Gram-negative bacteria, which are extensively protected by a three-layered cell envelope composed of an outer membrane, a cell wall and an inner membrane. At the same time, the cell envelope is one of the most important targets for fighting bacterial infections, as antibiotics and other antibacterial drugs often act by affecting its integrity.  MFPL group leader Boris Görke’s research efforts currently focus on the regulatory mechanisms that ensure proper synthesis and integrity of the cell envelope in response to changing environments. The gained insight allows for the development and further improvement of antibiotics.  One way for bacteria to adapt to their environment, is by using so-called “two-component systems”. These systems sense cues in the environment through a kinase bound to the inner membrane (QseE), which activates a response regulator located in the cytoplasm (QseF) by phosphorylation. The response regulator in turn controls expression of genes, which helps the bacteria to adapt to the changing conditions.  In their newest publication in PLOS Genetics, the researchers focus on such a system called QseE/QseF, which controls functions dedicated to cell envelope synthesis and repair.

By using extensive in vivo experiments, the researchers were able to prove that QseE/QseF requires a third component for function and signaling. This protein is called QseG, and sits in the outer membrane of the cell envelope. Interestingly, QseG undergoes a physical interaction with kinase QseE to activate the signaling cascade.   “This observation indicates that QseG and QseE form a complex bridging the envelope compartment between the outer and the inner membrane to start a genetic program inside the cell, which is an exceptional finding,” explains group leader Görke.  In pathogenic bacteria, such as the very dangerous EHEC (Enterohemorrhagic E. coli), QseE/QseF are known to respond also to the hormone epinephrine produced by the human host, in order to be able to adapt to the environment in the gut. The scientists discovered that, in fact, epinephrine also plays a role in non-pathogenic E. coli K12 strains.  “Interestingly, QseG is required for the response to epinephrine suggesting that it is involved in sensing this hormone. This is an important finding, as interruption of the Qse signaling cascade renders EHEC and other pathogenic bacteria non-virulent. The epinephrine sensor therefore represents an excellent target for novel antibiotics,” group leader Görke explains further.

While definitely intriguing, the findings also open up a plethora of new research questions for Boris Görke’s team: which factors regulate QseG, which is undoubtedly one of the necessary molecules to start this signaling cascade? And how does epinephrine exactly affect the two-component system?   The group speculates that possible interaction partners could perhaps sequester QseG and render it unavailable to modulate activity of the cascade. This will be one of the research questions the group will pursue in the coming months.