Vesicles are small, fluid filled structures that are surrounded by a lipid double layer. They are vital for many cellular and physiological processes, as they carry or secrete cellular cargo such as waste, hormones or neurotransmitters. 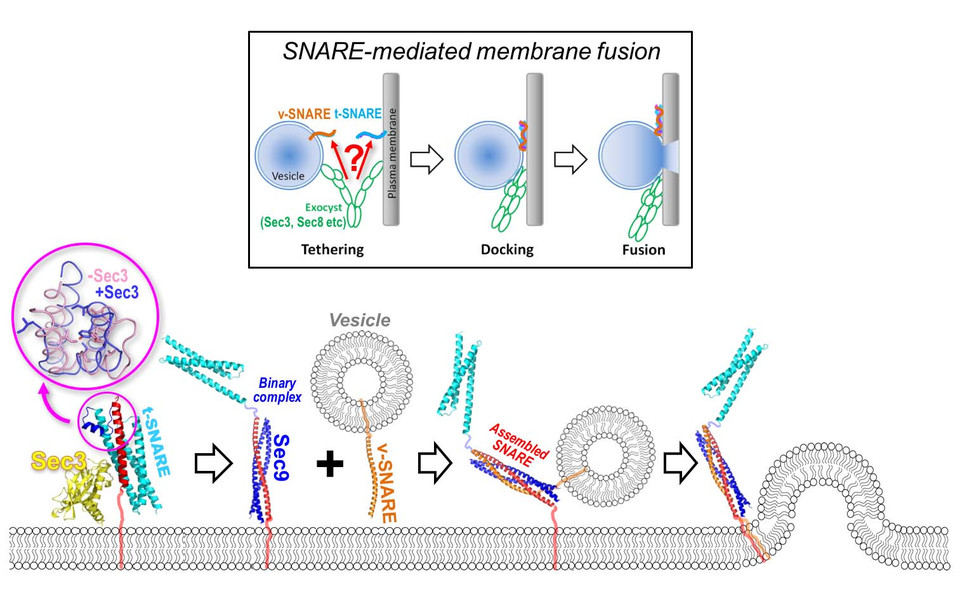 Depicted is the process of vesicle fusion mediated by SNARE proteins together with members of the exocyst complex. (c)Gang Dong

To fulfil their tasks, vesicles need to fuse with target membranes of other organelles within the cell or the cell’s plasma membrane, thus releasing their contents into the desired place. The biological importance of vesicles is underlined by their presence not only in humans, but also in plants, protists, fungi, bacteria and archaea. The complex mechanism of vesicle fusion is enabled by members of the SNARE (Soluble NSF Attachment Protein Receptor) protein family, often referred to as the “SNARE complex”. These SNARE proteins can be classified according to their location: v-SNAREs are associated with the vesicle membrane, whereas t-SNAREs can be found in the target membrane.

During vesicle fusion, the SNARE complex acts like a zipper that brings the vesicle and the target membrane close enough to each other to allow them to fuse. However, the details of how this process is initiated remained elusive. The team around MFPL researcher Gang Dong from the Department of Structural and Computational Biology in collaboration with scientists from the University of Pennsylvania have now reported their discovery of the mechanism behind the first step of the assembly of the SNARE complex during vesicle fusion in Nature Communications.

To allow SNARE-mediated fusion, the vesicles first need to dock to the plasma membrane in a process called “membrane tethering”. This is carried out by the so-called “exocyst complex” that is made up of eight different proteins, one of which is Sec3. Gang Dong and colleagues report that Sec3 directly interacts with the t-SNARE protein Sso2, much like two pieces of a 3D puzzle. This interaction leads to changes in the Sso2 structure, thus enabling the next steps of vesicle fusion. “Although others have previously suggested the potential role of the exocyst in regulating SNARE assembly, we are the first to identify the exocyst component that truly promotes the initial binary SNARE complex formation – the rate-limiting step in the vesicle fusion process. Furthermore, our crystal structure provides a mechanistic explanation of how such activation occurs.”, says Gang Dong.

To Gang Dong, the team’s recent publication is a great example for the importance of scientific collaborations, as the combined expertise of different scientists was essential for their discovery of this previously unknown step in membrane fusion. “To reveal the molecular mechanism of a biological process, structural and functional studies should, in my opinion, always go hand in hand. This was best put by Stephen Wainwright: ‘Structure without function is a corpse; function without structure is a ghost.’” Defects in SNARE-mediated vesicular fusion have been implicated in a number of neurodegenerative disorders such as Parkinson’s and Huntington’s disease and disorders of the immune system. Thus, collecting knowledge about the mechanisms of SNARE-mediated membrane fusion is crucial for the better understanding of the causes underlying these diseases and the development of potential therapeutics in the future.