Borja Mateos (Konrat Lab) and Anete Romanauska (Köhler Lab) are among this year’s exceptional young scientists awarded the Vienna BioCenter PhD award. To this day, 19 Max Perutz Labs students have received the prize for their PhD work. The prize was initiated in 2005 by former Perutz group leader Renée Schroeder and acknowledges the best PhD theses across the four research institutes at the Vienna BioCenter. Among previous awardees are current Perutz group leaders Martin Leeb and Stefan Ameres, and former principal investigator Claudine Kraft. 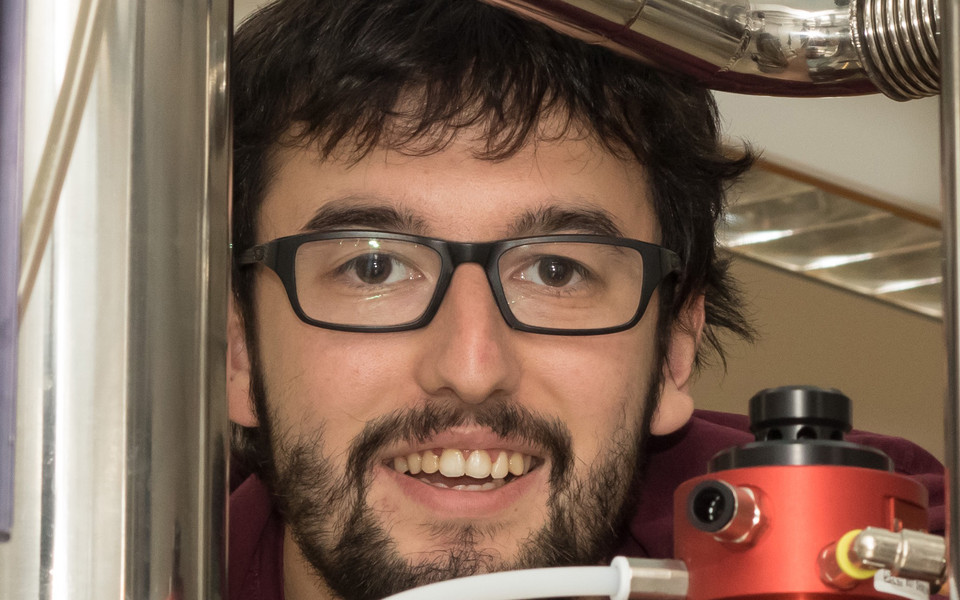 Borja Mateos studied Biochemistry and Molecular Biotechnology at the University of Barcelona. He joined the group of Robert Konrat for his PhD studies in 2016. Obtaining experience in integrative structural biology, biophysics and in NMR spectroscopy, he focused on intrinsically disordered proteins (IDPs). While many proteins adopt a well-defined three-dimensional structure, IDPs can adopt a broad distribution of conformations. However, IDPs are far from being random-coils and sample certain conformations that make them functional. In his PhD work, Borja investigated the structural dynamics of Osteopontin, a fully disordered extracellular protein. His work revealed that proline residues can facilitate the compaction of Osteopontin. Proline residues are abundant in IDPs and are typically known as disorder promotors. He has also characterized the binding of Osteopontin to integrins in living cells at atomic resolution using NMR spectroscopy. Currently, he is a postdoctoral researcher in the Precision Medicine and Metabolism Lab of the CIC bioGUNE (Bilbao, Spain) where he aims to broaden the applicability of NMR spectroscopy to biological challenging questions such as metabolomics or protein stability. However, he has not abandoned the study of IDPs. “We are trying to understand the effect of post-translational modifications on the structural dynamics and function of IDPs”, Borja says.

Anete Romanauska was born in Latvia, studied in Riga, and started at the VBC as a Summer School Student. She decided to stay in Vienna to continue her work in Alwin Köhler’s lab to study the nuclear envelope. This double membrane protects the genetic information stored in the nucleus. Anete focused on the inner nuclear membrane (INM) for her PhD work, and made an unexpected discovery, published in a two-author Cell paper in 2018. The INM is enriched with proteins that help organize the genome as well as the nuclear lamina. The INM is continuous with the outer nuclear membrane and the ER, and therefore it is generally assumed that the INM passively receives lipids from these membranes and is metabolically silent. In her work, Anete overturned this perception by demonstrating that active lipid metabolism at the INM can lead to the formation of nuclear lipid droplets inside the nucleus. “We found that the INM has a specific lipid composition and that it responds to different stimuli, including dietary sources of fatty acids. However, we still do not know how nuclear lipid droplets affect the properties of the INM, as well as genome organization and functionality.” Anete’s findings raise fundamental questions about the nature of the INM that she has continued to address in her postdoctoral work in the Köhler Lab.