What is the origin of the genetic code?

In a project supported by the Volkswagen foundation, the lab of Bojan Zagrovic and their collaborators Zoya Ignatova (University of Hamburg) and Markus Zweckstetter (MPI Biophysical Chemistry Göttingen) aim at experimentally and computationally testing the mRNA-protein complementarity hypothesis. This novel and still controversial idea could help explain the origin of the universal genetic code, but may also carry major implications for the biology of today. The grant amounts to a total of €1.5 m and is coordinated by Zoya Ignatova. 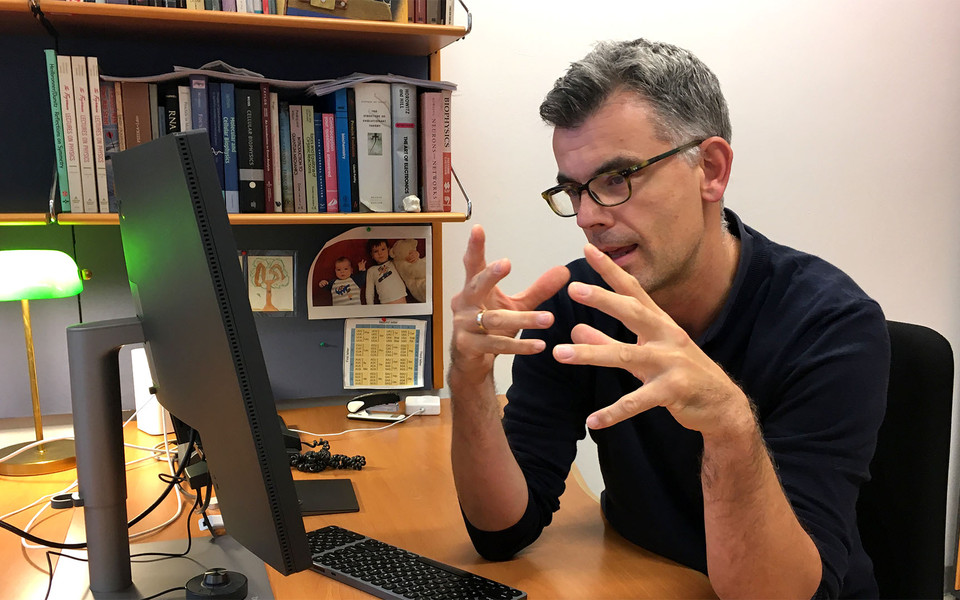 Ever since the early days of molecular biology, researchers have been speculating about the driving forces that have led to the establishment of the genetic code. It is an intriguingly simple set of rules that allows cells to produce messenger RNAs that can be translated into proteins. The code is based on only 4 nucleotides, represented by the letters A, G, C, T, or U in RNA. In genes they are arranged in sequences and read in steps of three, called a triplet or codon. Each codon represents one amino acid, or contains the information to stop translation of the message into proteins. Fascinatingly, the origin of the genetic code remains mysterious. An mRNA-protein complementarity hypothesis, recently proposed by the lab of Bojan Zagrovic, aims to shed light on this long-standing puzzle. We talked with Bojan about the hypothesis and how the consortium involved in the Volkswagen foundation supported project will combine their approaches to try to answer a long-standing and fundamental question about life.

Bojan, why is the origin of the universal genetic code such an important question?

The answer is twofold. The first one has to do with its universality. There are many phenomena in biology that are system specific, but the genetic code is universally conserved, with only minor exceptions seen in some organisms. Therefore, how it came to be is an important question. The second reason is that the genetic code provides the central contact point between the world of nucleic acids and the world of polypeptides, two of arguably the most important biopolymers in all of biology.

There are a few theories trying to explain the origin of the universal genetic code. What is the stereochemical hypothesis and why did you choose to scrutinize it further?

The important question here is: why does a certain triplet code for a certain amino acid? The stereochemical hypothesis, proposed by Carl Woese and others a long time ago, suggests that the simplest way to establish this connection is following the direct interaction preferences between codons and the amino acids they encode. The problem is that the experimental evidence in this direction has remained inconclusive. The interactions are weak: a triplet may bind a certain amino acid, but could also bind other ones. However, most studies have only dealt with individual codons and amino acids. But, what if you connected multiple codons and amino acids? If you think about Velcro, for example: you have two sets of brushes and the individual hairs in those brushes have a very weak affinity for each other. But, if you put many of them next to each other, the Velcro sticks together. We now suggest that such an amplification could also be seen if one investigates the connection between chains of codons and chains of amino acids, or in other words, mRNAs and entire proteins. Simply put, mRNAs and the proteins they encode could be physiochemically complementary to each other and bind in a co-aligned fashion, especially if unstructured. Our preliminary findings point in this direction.

It is known that there are certain specific interactions between nucleic acids and proteins. RNA binding proteins, for example, can interact with and often modify RNA. What are the implications of your hypothesis in this context?

On the one hand, our hypothesis suggests that under some circumstances most proteins may actually have RNA-binding capabilities and that binding may represent the essence of the RNA-protein relationship. It also means that we could potentially understand all of RNA- protein interactions through the prism of the genetic code. The genetic code is basically a coding table that tells us how translation works. If we find evidence for the complementarity hypothesis, one could actually flip this statement around: we could use the genetic code to understand binding in general. This means, in theory, that we could predict who binds to whom, why, with what affinity and so on. It is almost like the genetic code could be seen as a Rosetta Stone, a dictionary, for understanding RNA-protein interactions in general.

The essence of our hypothesis is that a large number of proteins bind their own mRNA. Therefore, the lab of Zoya Ignatova will be testing this hypothesis on a cell-wide, proteomic level. On the other hand, Markus Zweckstetter will focus on a particular protein, RNA polymerase II, one of the most important enzymes in the cell, and its interactions with different RNAs. By doing so, we will combine a large-scale approach with a detailed, mechanistic approach to see whether the data support our hypothesis. I am very proud and honored to be collaborating with such fantastic groups.

And what will be the role of your lab in the project?

My lab will provide the connection between the two experimental sides. We will provide computer simulations as well as theoretical, structural, and bioinformatic analysis. And, we will, in a way, be in charge of guiding the experimental work to test a particular set of implications of the hypothesis.

The whole project relates to a central paradigm in all of biology. We talked about the effects on RNA binding proteins specifically - what would be the implications on a larger scale if the hypothesis turns out to be true?

The concept of physicochemical complementarity is one of the strongest explanatory principles in all of biology – think, for example, of the complementarity between the two strands of DNA, which underlies gene duplication, or the connection of antibody-antigen that is at the heart of our immune system. It would be a big step forward if one could show that the two key players in all of biology, proteins and their mRNAs, are under some circumstances also complementary to each other.

About the Volkswagen Foundation: https://www.volkswagenstiftung.de/en