Dropping anchor in the Z-disc

Most animals require muscles to feed, flee, or fight. Force generation during skeletal muscle contraction requires that actin filaments are firmly anchored in a structure called the Z-disc, an essential component of the sarcomere, which is the repeating building block of muscle fibres. An essential and major component of the Z-disc, α-actinin, is responsible for cross-linking actin filaments as well as anchoring the protein Titin, which controls sarcomere length. Mutations in α-actinin cause muscular dystrophies and cardiomyopathies. In work published in Cell, scientists at the Max Perutz Labs, led by Kristina Djinovic, have determined the three-dimensional structure of α-actinin, shedding new light on its regulation. 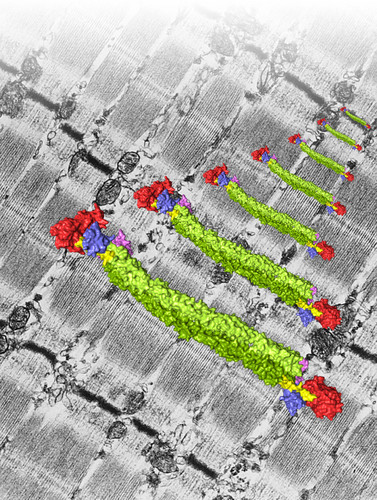 Scientists led by Kristina Djinović-Carugo at the Max F. Perutz Laboratories (MFPL) of the University of Vienna and the Medical University of Vienna have elucidated the molecular structure and regulation of the essential muscle protein α-actinin. The new findings allow unprecedented insights into the protein’s mode of action and its role in muscle disorders. The findings, made in collaboration with King’s College London (KCL), may lead to improved treatments, and are published in the top-class journal Cell.

Most animals rely on muscles to move, irrespective whether it is feed, fight or flee. The smallest building block of a muscle is the sarcomere, hundreds of which are successively arranged to form muscle fibers. “Sarcomeres are mainly made up of actin and myosin protein strands called filaments. Muscle shortening or contraction depends on these filaments sliding against each other, and requires that the actin filaments are anchored in planes, called Z-discs. The major Z-disc protein is α-actinin, which is also responsible for anchoring another protein called titin. Titin ensures that the actin and myosin filaments of a sarcomere are positioned correctly and re-adjusts the sarcomere to its original length after muscle activity”, explains structural biologist Kristina Djinović-Carugo.

α-Actinin is clearly an essential protein – embryos of organisms that cannot produce it die. If, however, α-actinin is produced but does not function properly, the organism suffers from diseases such as muscular dystrophies and cardiomyopathies. Knowing the detailed structure of α-actinin and muscle would not only better our understanding of the role of mutant proteins in disease, but would also aid accurate diagnosis and may ultimately assist designing new therapies.

Muscle protein structure is a research topic of Kristina Djinović-Carugo at the Max F. Perutz Laboratories (MFPL) of the University of Vienna and the Department for Structural and Computational Biology. The head of the “Laura Bassi Centre of Optimized Structural Studies” explains: “We determined the structure of α-actinin using a technique called X-ray crystallography. It took us several years to produce sufficient high-quality protein necessary to obtain quality crystals for our analysis.” With patience and innovative ideas the team eventually teased out the detailed structure of α-actinin, and in collaboration with Mathias Gautel at the British Heart Foundation Centre of Research Excellence at KCL could also show how the protein is regulated.

The structure is similar to fusilli pasta

The structure showed that α-actinin forms a symmetrical complex made of two molecules. Each molecule has a head, short neck region and a rod-shaped body that looks like four fusilli pasta aligned in a zigzag. The head of α-actinin binds actin whilst two small L-shaped parts sit at the end of the rod and interact with the neck of the other molecule. However, the structure revealed to be more than the sum of its parts: placing two diametrically opposing α-actinin molecules does not only allow simultaneous binding of actin and titin filaments and so anchoring them in the Z-disc, but also confers regulation.

“It was a long standing hypothesis, that the interaction of α-actinin with titin is regulated via a fatty acid molecule termed PIP2 which switches the molecule on and off. Our structural data now for the first time reveals how a fatty acid opens and closes the muscle protein α-actinin, modifying its ability to bind actin and titin”, explains Kristina Djinović-Carugo. If there is no PIP2, one of the L-shaped parts of an α-actinin molecule binds a titin-lookalike region in the neck of the opposing molecule. If PIP2 is present, the L-shaped part detaches from the neck and binds titin. The team complemented the structural picture of the interaction of PIP2 with α-actinin by analyzing the dynamic life of α-actinin in collaboration with Katharina Pirker (University of Natural Resources and Life Sciences Vienna), and Bojan Žagrović (MFPL). Mathias Gautel’s team also discovered that, when they destroyed α-actinin’s binding site for PIP2 or locked it in a position which can permanently bind titin, ordered sarcomeres were lost; the muscle was broken.

“Our findings give new insights into how muscle is built and flexes at the molecular level. This will help to better understand both inherited and acquired muscular diseases, and aid therapy development”, sums up Kristina Djinović-Carugo. She adds: “Without long-term funding through the FWF, the University of Vienna, the FFG, the EU-FP7 Marie Curie Action ‘Networks for Initial Training’ program, the British Heart Foundation, as well as the long standing collaborations with Mathias Gautel and Katharina Pirker, this research would have been impossible. This paper is the fruit of eight years of hard of labor!”