Gene transcription is a highly dynamic process and correct export of messenger RNAs is key to the synthesis of the correct arsenal of proteins in the cytoplasm that the cell needs. Nuclear pore complexes have long been known to be the key transport routes for molecules in and out of the nucleus, but their role in gene transcription has been somewhat enigmatic. Max Perutz Labs scientist Alwin Köhler and his student Anete Romanauska now show that nuclear pore complexes make use of adaptor proteins to link actively transcribed regions of the genome to their export from the nucleus and translation in the cytosol. The work, published in Cell, provides the first mechanistic insight into how nuclear pore complexes communicate directly with the transcription machinery. 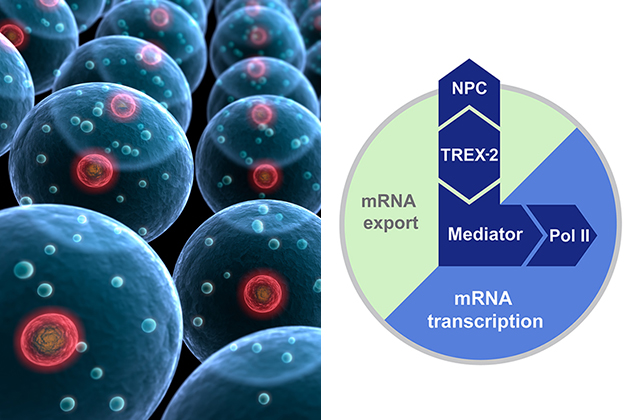 Nuclear pores in the nuclear membrane do not only control the transport of molecules into and out of the nucleus but also play an important role in gene expression. Researchers at the Max F. Perutz Laboratories (MFPL) of the University of Vienna and the Medical University of Vienna have deciphered a mechanism by which nuclear pores use "interpreters" to directly influence gene expression. The findings recently published in Cell were a collaborative effort with scientists at the Research Institute of Molecular Pathology (IMP) and at the Pennsylvania State University (USA).

Interpreters in the Cell

Scientists have been racking their brains over nuclear pores. Their role in the transport of molecules between nucleus and cytoplasm has been extensively described. Such molecules also include building blocks that help decipher the genetic information stored within the nucleus and guide those that have to leave the nucleus with a particular message out of it. This information is needed to produce proper proteins in the cytoplasm.

In collaboration with researchers at the neighboring institute IMP in Vienna and colleagues at the Pennsylvania State University (USA), Alwin Köhlers group has succeeded in deciphering a mechanism that explains communication between nuclear pores and genes. „During our research, we discovered a ‚translation program’ that prepares the genetic information for RNA polymerase II,“ explains Alwin Köhler. RNA polymerase II is the key player during transcription and generates copies (messenger RNA, mRNA) that are necessary for protein synthesis.

In detail, the researchers identified the so-called TREX-2 complex as interpreter number one. TREX-2 receives information directly from the nuclear pore and translates this message for a complex called Mediator. Subsequently, Mediator makes the information accessible to RNA polymerase II. The resulting mRNA is sent back to TREX-2 and the nuclear pore and then exported into the cytoplasm.

Following the publication in Developmental Cell in May, this is already the second study of Alwin Köhler’s group published in one of the most important scientific journals in the field of basic research this year. „Deciphering transcriptional mechanisms is crucial for understanding the blueprint for a cell. This lays the basis for eventually treating numerous diseases such as cancer, since diseases are often caused by 'communication errors' during gene expression. Ideally, basic and clinical research go hand in hand. At the Vienna Biocenter, the Medical University of Vienna has the great opportunity to work closely with excellent researchers of the University of Vienna and the neighboring institutes. The best example is our successful collaboration with Tim Clausen at the IMP,“ says Alwin Köhler. But the real work is only just beginning: „We have answered one question, however, ten new questions have arisen. That is precisely what makes this project so fascinating,“ adds Maren Schneider, one of the first authors of the study.