The Max Perutz Labs recognize the most ambitious and innovative PhD projects at the institute with the Max Perutz PhD Fellowship. This year’s winners are Júlia Garcia Baucells (Dammermann Lab) and Paulina Kettel (Karagöz Lab). Their respective projects will investigate the material properties of centrosomes and the unfolded protein response. 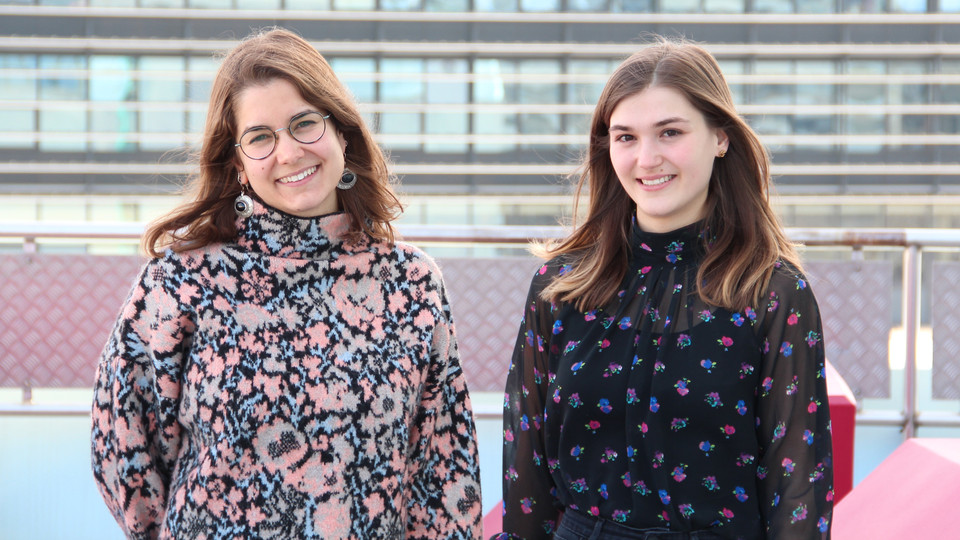 Centrosomes are organelles that organize the microtubule cytoskeleton and help separate chromosomes during cell division. “Centrosomes have been extensively studied from a molecular point of view, but we don’t know much about their material properties, such as viscosity, elasticity or rigidity”, says Júlia Garcia Baucells. “However, we believe that these properties may have an impact on the fidelity of chromosome segregation and that centrosome abnormalities observed in cancer cells could stem from compromised material properties”. Júlia will use atomic force microscopy and Brillouin microscopy to characterize the material properties of centrosomes and understand the consequences of their perturbation. Júlia is originally from Spain and studied biochemistry and molecular biology in Tarragona. She then moved to Dresden and did her Master’s project in the lab of the biophysicist Stephan Grill. She joined the lab of Alexander Dammermann in August 2021.

The endoplasmic reticulum (ER) is essential for the synthesis, folding, trafficking, and secretion of a large repertoire of cellular and extracellular proteins. The accumulation of misfolded proteins in the ER lumen, termed ER stress, is potentially dangerous to the cell. The unfolded protein response (UPR) senses these misfolded proteins to drive transcriptional programs that restore homeostasis in the ER. The most conserved UPR receptor is the transmembrane protein IRE1. “The lipid composition of the ER membrane is thought to play an important role in the UPR activation, says Paulina Kettel. “In my project I am going to reveal how the lipid composition of the ER changes during ER stress and how these changes influence the UPR activity”. A German native, Paulina studied biochemistry in Frankfurt where she gained experience in biochemical reconstitution systems. Next to her Master’s thesis in the lab of Ivan Dikic, she did an internship at UC Berkeley (USA). Paulina joined the lab of Elif Karagöz in November 2021.