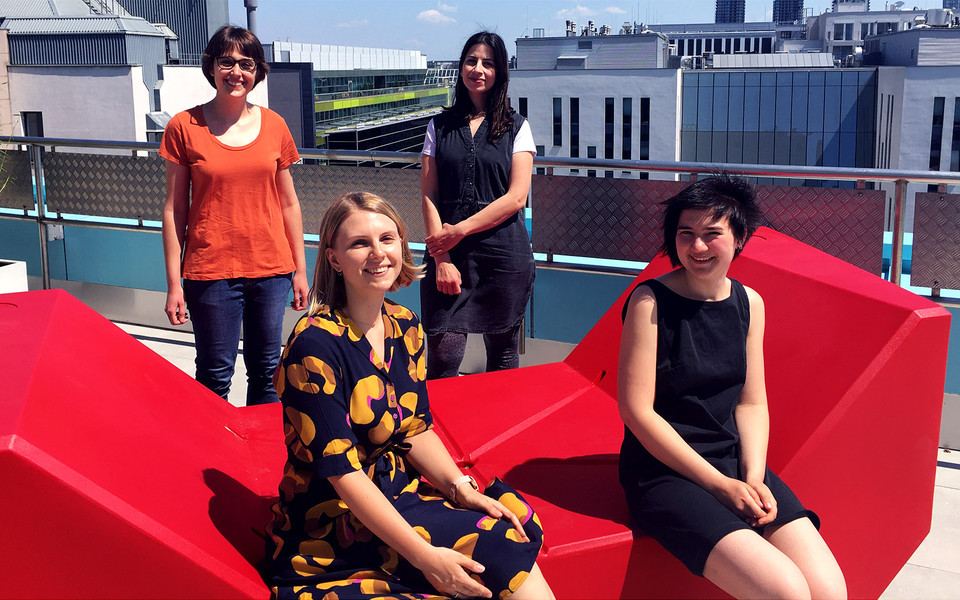 Protein quality control in the ER

Proteins need to fold into distinct structures to fulfil their functions. The accumulation of misfolded or unfolded proteins is a signature of numerous diseases. Cells must therefore guard against the accumulation of misfolded proteins. The Karagöz lab studies the unfolded protein response, a protective mechanism that prevents the accumulation of toxic protein aggregates in the cell. PhD student Aleksandra Anisimova is specifically interested in post-transcriptional regulation of specific mRNAs in response to stress. “A key regulator of RNA stability during the stress response is a protein called IRE1”, she explains. “In my project I aim to understand the fate of IRE1 targets during stress and how RNA-binding proteins are involved in this regulation”. Originally from Poland, Aleksandra grew up in Russia and did her Master’s thesis at Moscow State University in collaboration with Harvard Medical School. She joined the Karagöz Lab in 2019.

A-type lamins in the nucleus

The lab of Roland Foisner has recently discovered that binding of A-type lamins in the nuclear interior to a protein called LAP2α regulates their mobility and that of surrounding chromatin. In her PhD project, Daria Filipczak will continue the group’s work on the elusive nucleoplasmic lamins, which have fundamentally different functions from lamins at the nuclear periphery. “In particular, I will test the hypothesis that LAP2α and lamin A/C regulate chromatin accessibility in the nuclear interior, thereby providing an additional level of gene regulation”, she says about her project. Daria studied Biotechnology at the University of Wroclaw in Poland where she developed a keen interest in nuclear structural proteins and chromatin organization. She spent some time at the Max Perutz Labs as an Erasmus student in the lab of Gang Dong before joining the lab of Roland Foisner as a PhD student.

During prophase of the first meiotic cell division, parental homologous chromosomes rapidly move, helping them to pair and exchange genetic material. They are coupled to the nuclear envelope, which is tied to the lamina meshwork positioned underneath the inner nuclear membrane. As the rigid lamina network resides between chromatin and the nuclear envelope, it would be well placed to inhibit chromosome movements and chromosome connections with the nuclear envelope. “Although the lamina is not completely disassembled during meiotic chromosome movement, as it is during mitosis, a substantial amount of lamin reorganization has been observed”, says PhD student Dana Abdeen. “In my project I would like to better understand how lamina reorganization is controlled during meiotic prophase movements”. Dana Abdeen studied Biological Sciences in Jordan and later did her master’s project at the Institute of Molecular Biotechnology (IMBA). She now pursues her PhD in the lab of Verena Jantsch. “Besides the exciting topic, my lab offers a friendly and supportive, yet challenging environment for students”, she says.

The endoplasmic reticulum is directly connected to the nucleus by junctions with the outer nuclear membrane. This connectivity is crucial for cellular homeostasis and to supply new lipids and membrane proteins to the nucleus. The structural nature of these connections has so far not been investigated, due to limitations in the microscopy techniques available. “However, we have now 3D electron microscopy techniques that allow us to visualize these contact sites at a very high resolution”, says PhD student Helena Bragulat Teixidor from the Otsuka lab. “In my project I aim to reveal the ultrastructure of the connections linking the endoplasmic reticulum to the nuclear envelope, find out which proteins are remodelling them, and understand why these connections are important to support proper communications between the ER and the nuclear envelope throughout the cell cycle”. Helena is from Spain, studied Biology at the University of Girona and later moved to the University of Heidelberg (Germany) for her Master’s. She joined the Otsuka Lab in 2019.