Congratulations to Valentina Budroni, Toni Manolova, Alexander Stockinger, and Alexander Tsarev who have been awarded DOC Fellowships by the Austrian Academy of Sciences (ÖAW). The DOC program offers funding for highly qualified doctoral candidates in all areas of research. The fellowships will support projects on antiviral immunity, transposon silencing, the regenerative abilities of bristle worms, and RNA metabolism. 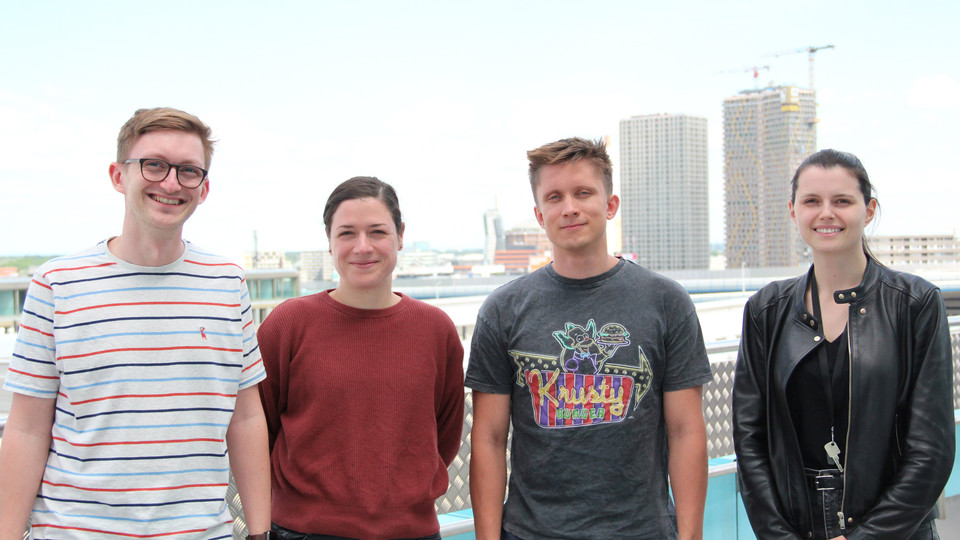 APOBEC3 proteins are important antiviral restriction factors involved in the innate immune response. They protect the organism from retroviral infection by mutating the viral genome. However, their ability to hypermutate the viral DNA comes at the risk of potentially damaging our own genetic material. The activity of such hypermutators is therefore tightly regulated and their levels in close proximity to our DNA are kept as low as possible. Dysregulation of several APOBEC3 proteins has been correlated with mutational footprints in cancer. “We aim to identify and characterize the factors that regulate the activity and stability of cancer-associated APOBEC3 proteins and by that protect the host cell from unwanted mutagenesis”, explains Valentina Budroni, who is pursuing her PhD in the lab of Gijs Versteeg. Valentina studied at the University of Vienna and in Milan (Italy) before returning to Austria for her PhD.

Coiled-Coil Domain-Containing Protein 174 (CCDC174) is an uncharacterized protein, involved in several nuclear RNA metabolic pathways, ranging from RNA splicing to RNA degradation. How it mediates these functions remains enigmatic. "In my project, I aim to determine the structure of CCDC174 to find out more about its interaction partners and functions", says Toni Manolova. She will use biochemical, structural, and cell biological approaches to obtain a high-resolution picture of CCDC174 and its binding partners and investigate its biological roles. Originally from Bulgaria, Toni studied biochemistry in Bremen and Tübingen (Germany). She first joined the lab of Sebastian Falk as a master's student before becoming a PhD candidate in October 2021.

Many animals have regenerative abilities that are lost with age. The marine bristleworm Platynereis dumerilii, for example, can regrow its tail after amputation. However, it quickly loses this ability as it matures and prepares for reproduction. “In my project, I aim to elucidate the molecular basis of this switch in order to understand how animals lose their regenerative abilities as they age”, says Alexander Stockinger. To this end, he will use a combination of single cell RNA sequencing and imaging techniques to analyze how hormones change the cellular landscape during regeneration and after the animals mature. Alexander studied Biology in Salzburg (Austria) and was a Master’s student in the lab of Florian Raible. He continues his work in the lab as a PhD student of the Vienna BioCenter PhD program.

Transposable elements (TEs) are parasitic DNA sequences that can catalyze their own movement within the host genome. An important pathway that inhibits transposon activity relies on piRNAs, a type of small non-coding RNA. “We know a lot about the mechanics of how piRNAs silence transposons, but we lack knowledge about their kinetics”, explains Alexander Tsarev. In his project, Alexander will use the SLAMseq technology developed by the Ameres lab to quantify the rates by which piRNAs are transcribed, matured and turned over. Alexander studied biochemistry in St. Petersburg (Russia) and bioinformatics and computational chemistry in Halle an der Saale (Germany). He is now a joint PhD student in the labs of Stefan Ameres and Julius Brennecke (IMBA).

About the ÖAW Doc Fellowships