The nuclear envelope is the signature element of eukaryotes. It separates nucleoplasm from cytoplasm and serves as the protective vessel for the genome. The nuclear envelope combines disparate features: durability with plasticity, selective traffic with mass transport, spatial enclosure with sophisticated signaling. In doing so, it enables cells to protect, decode and regulate their genome. How a single ‘intelligent boundary’ can achieve this multitude of functions remains one of the biggest puzzles in biology. Our goal is to understand the Biology of Boundary Conditions from a mechanistic perspective using the nuclear envelope as a challenging example. This will allow us to understand how it is built, how it breaks, and how to fix it when it is broken.

Following medical studies in Würzburg, doctoral work at Harvard Medical School, pediatric residency and postdoctoral work in Heidelberg, Alwin became a Junior group leader at the Max Perutz Labs in 2010 and is now the Professor of Molecular Biology and the Scientific Director of the institute. 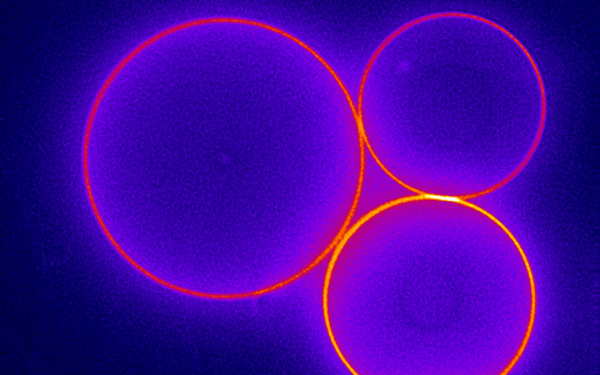 The nuclear pore basket is a conical, net-like structure that is attached to the main body of the nuclear pore complex. The basket has numerous functions in nucleocytoplasmic transport and gene expression. Moreover, when huge cargo is transported through the pore, the basket can expand and then contract again, suggesting a great degree of structural plasticity. Scientists have long tried to understand how the nuclear basket can achieve this, but its biochemical fragility prohibited a reconstitution from purified components . We have now managed to reconstitute key parts of the basket on synthetic membranes. (Cibulka, et. al., Science Advances). Our study reveals an intricate assembly principle, characterized by a flexible 'suspension cable’ that ties the basket together, and opens avenues to reconstitute the early stages of nuclear pore biogenesis. 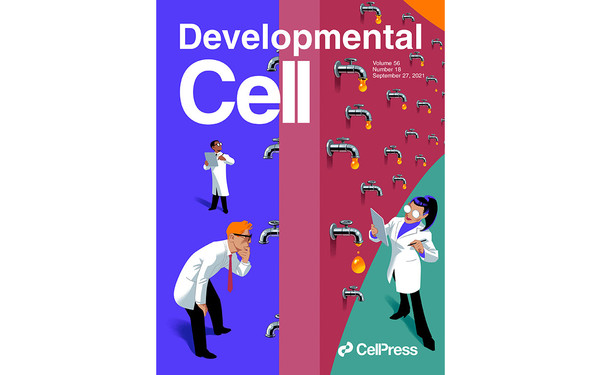 How to detox the nucleus of unsaturated fat

Excess unsaturated fat in cells must be detoxified. We recently discovered that cells package toxic unsaturated fatty acids into lipid droplets that form specifically on the outer nuclear membrane and ER (Romanauska & Köhler, Developmental Cell, 2021). By contrast, lipid droplet formation at the inner nuclear membrane is switched off. In doing so, toxic fat is channeled away from the genome-filled nuclear interior. We suggest that this mechanism protects both the functionality of the nuclear envelope membrane and prevents the flooding of the genome with lipid droplets. Intriguingly, pathological accumulation of nuclear lipid droplets in liver cells has been observed in mouse-models of non-alcoholic fatty liver disease (NAFLD). These observations raise many questions about the role of dysregulated nuclear envelope lipid metabolism in obesity and liver disease, and whether such pathways can be pharmacologically reprogrammed. 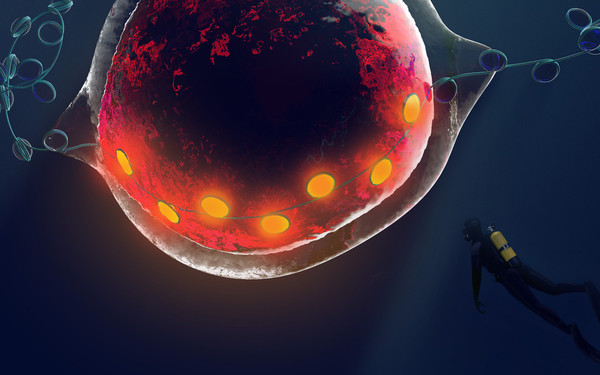 Throughout all kingdoms of life, cells use compartmentalization to create functionally distinct units in what would otherwise be a chaotic cellular environment. We usually think of these compartments as requiring a lipid bilayer to differentially concentrate certain factors. Recent studies, however, suggest a new type of organelle which is based on a process called liquid–liquid phase separation (LLPS). This process – the same that underlies oil and water demixing - can lead to the formation of fluid-like compartments. The organizing principles of these phase-separated structures are poorly understood and represent a new frontier in biology. We recently discovered layered protein droplets, in which a chromatin-modifying enzyme encapsulates a liquid scaffold (Gallego, Schneider, Mittal et al., Nature 2020). The scaffold attracts chromatin and promotes its modification by ubiquitin. This is an intriguing example of a dynamic nuclear sub-compartment that organizes enzymatic activity in a unique way. Ultimately, our research can generate a new under­standing of how cells utilize biochemical ‘liquidity’ as a shaping force for constructing the nucleus - the sophisticated organelle that is central to eukaryotic life. 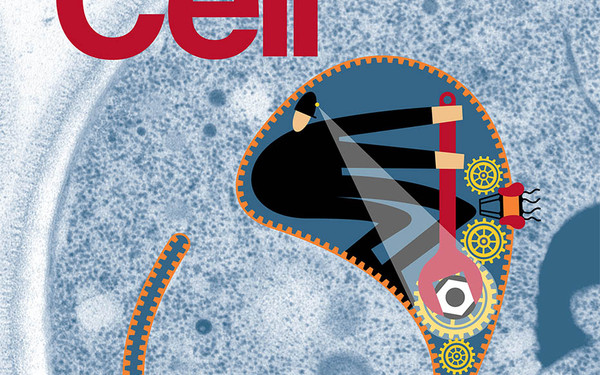 The assembly of new NPCs is tightly controlled. NPCs are embedded in holes formed by the fusion of the outer and inner nuclear membranes. Inserting a new NPC into an intact nuclear envelope is a fascinating, but poorly understood mechanical problem. Put simply, a hole must be pierced without the balloon popping. Specifically, the inner and outer nuclear membrane have to be bent and fused to open a pore membrane, which has to be stabilized afterwards. In conjunction with this membrane remodeling event, ∼500 nuclear pore proteins have to assemble into a functional NPC to prevent uncontrolled leakage of nuclear or cytoplasmic material. We have discovered a new function for the NPC basket in shaping the nuclear membrane to promote NPC and nuclear envelope integrity (Mészáros et al., Dev Cell, 2015). Future studies aim at understanding how various NPC proteins cooperate to sculpt their membrane environment. We use biochemical reconstitution as a tool to get key insights into what is minimally needed and how mechanisms emerge from component parts.

Tardigrades (also known as water bears or moss piglets) are one of the most resilient animals on our planet: they withstand conditions that would fatal to nearly all other life forms on earth. This includes temperatures from close to absolute zero to about 150°C, pressures six times greater than those found in the deepest ocean trenches, ionizing radiation at doses lethal for a human, and even the vacuum of outer space. Tardigrades can go without food or water for decades, only to rehydrate, forage, and reproduce. They survive this by falling into an enigmatic state called cryptobiosis (hidden life), in which they are neither dead nor alive. We are investigating selected aspects of Tardigrade biology with the support of the Swiss NOMIS Foundation. We want to understand their outstanding robustness, specifically, how nuclear envelope architecture and function is preserved under extreme conditions. 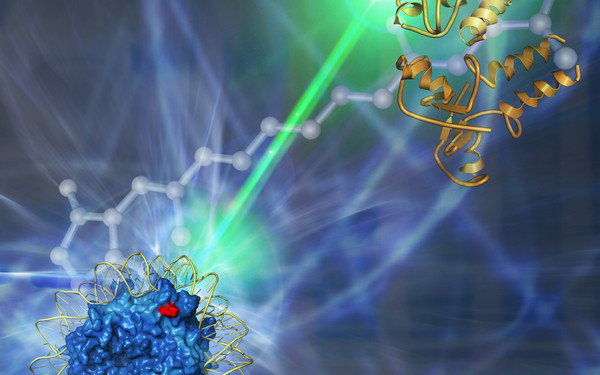 Related to our interest in gene expression, we are studying the modification of chromatin by ubiquitin. When appended to histones, ubiquitin functions as an important epigenetic switch to regulate multiple steps of transcription. Histone H2B monoubiquitination is mediated by the E2 and E3 enzymes Rad6 and Bre1 (Gallego et al., PNAS 2016). Their activity is counteracted by a deubiquitinase of the SAGA complex (Köhler et al., Cell 2010). We are dissecting the structure and function of this intricate molecular machinery to understand its biology in health and disease. Recently, we have begun to study selected aspects of nuclear protein quality control and its links to nuclear envelope homeostasis. 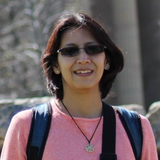 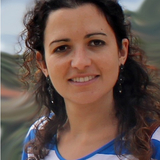 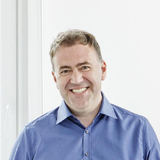 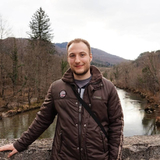 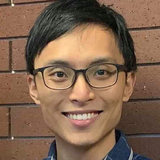 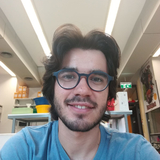 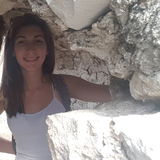 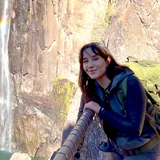 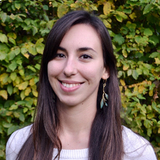 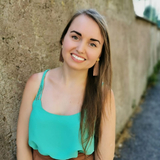 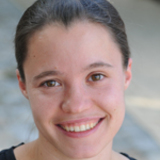 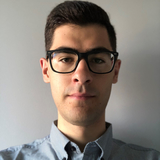 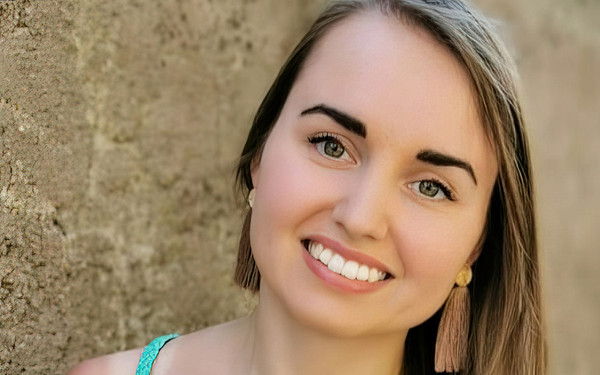 Congratulations! Anete has been awarded the Science & SciLifeLab Prize for Young Scientists in the category “Cell and Molecular Biology”. The prize was initiated in 2013 by the journal Science and the American Association for the Advancement of Science (AAAS; the world’s oldest and largest general science organization) together with the Science for Life Laboratory (SciLifeLab), a Swedish research center. The prize is given to outstanding early career researchers, who publish essays about their discoveries in Science, and are invited to Stockholm to receive their award in the Hall of Mirrors at Grand Hôtel, the original venue of the Nobel Prize. 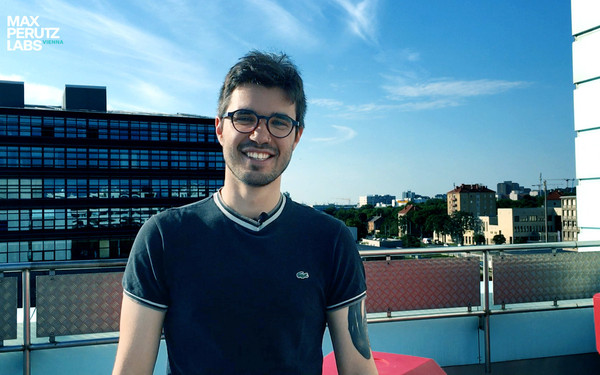 The City of Vienna recognizes outstanding scientific projects, which have the potential to educate and inspire the public. In his PhD work, Adrià wants to find out how tardigrades (also called water bears) manage to survive extremes that would kill the vast majority of animals on this planet. Adrià is also keen on communicating his research to a wide audience: he has written a children’s book about tardigrades and has started a YouTube channel where he explains current scientific topics to a lay audience. The Impact.Award aims to empower young researchers to engage in a dialogue with society on how to address the global challenges we face, including climate change and environmental degradation. 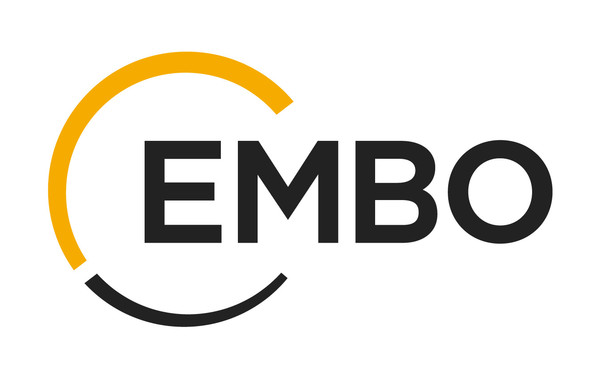 Every year EMBO (European Molecular Biology Organization) selects distinguished scientists who have made outstanding contributions in the field of the life sciences. New members are nominated and elected by the existing EMBO Members. EMBO Members guide the execution the of EMBO Programmes and activities by serving on EMBO Council, Committees and Advisory Editorial Boards. Collectively, they influence the direction of European science and strengthen research communities across Europe. EMBO was founded in 1964. It’s first chairman was Max Perutz. 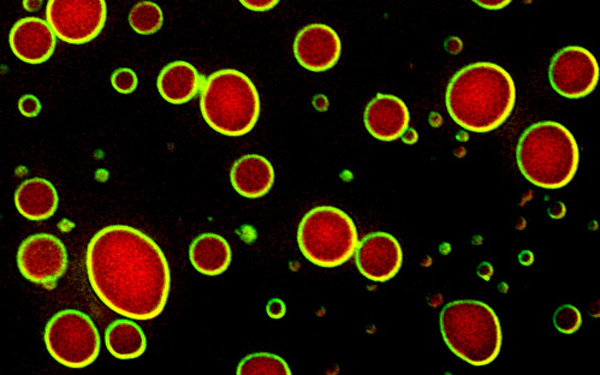 A key question in biology is how genes are turned on and off at the right time and place, put differently, how specific proteins become concentrated on a specific gene to turn it on and off. Scientists, who try to painstakingly dissect such ‘genetic switches’, would wish for a simple device that is easy to understand – a mechanical switch with a button to press. However, nature found a different solution and, surprisingly, the solution is - liquid. 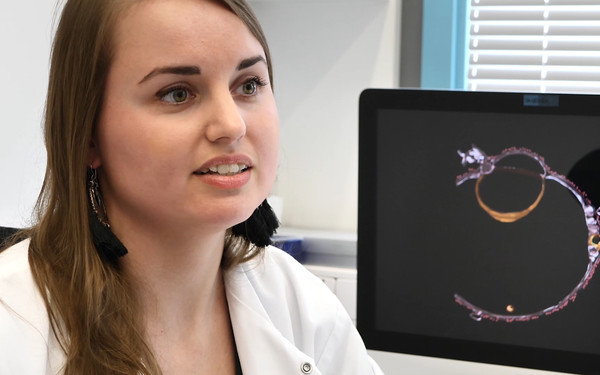 The Weintraub Student Award is one of the most prestigious and competitive international student awards recognizing “outstanding achievement during graduate studies in biological sciences”. Anete Romanauska, PhD student in Alwin Köhler’s lab, has been selected as one of twelve students from around the globe in 2020. The award is sponsored by the Fred Hutchinson Cancer Research Center in Seattle.

The Austrian Science Fund has awarded a special research programme grant to a team of scientists led by researchers at the Max Perutz Labs in collaboration with scientists from other institutes. The programme will mechanistically address the question of how the targeted degradation of proteins contributes to health and disease. The research projects of the consortium are coordinated by group leader Sascha Martens - with the contributing groups of Andreas Bachmair, Elif Karagöz, Alwin Köhler, and Gijs Versteeg from the Max Perutz labs - and aim at dissecting the molecular mechanism of how ubiquitin regulates protein degradation and the crosstalk between the two pathways. 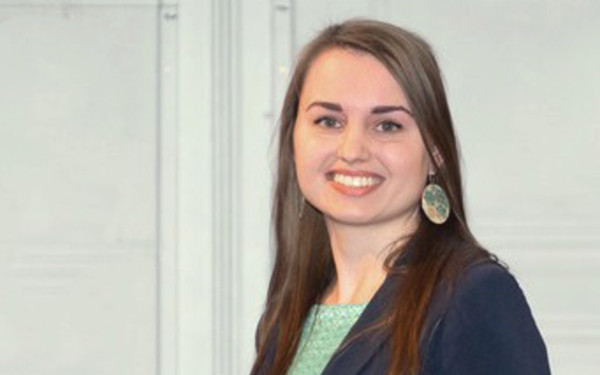 The Medical University of Vienna has nominated Anete Romanauska as Researcher of the Month. Born in Latvia, she studied Biology in Riga and later in Vienna. She joined Alwin Köhler’s Lab in 2016 as a PhD student. In her research she is interested in the role of lipid metabolism at the nuclear envelope.

We are always looking for talented, ambitious scientists. Several Postdoc, PhD and Master positions are currently available. Please include a summary of previous research interests, a statement about your motivation to work with us, and the names of potential referees in your application.

View all Publications of Group Köhler 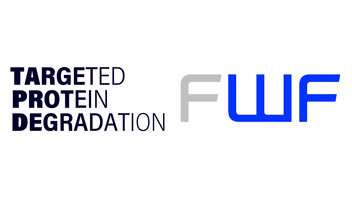 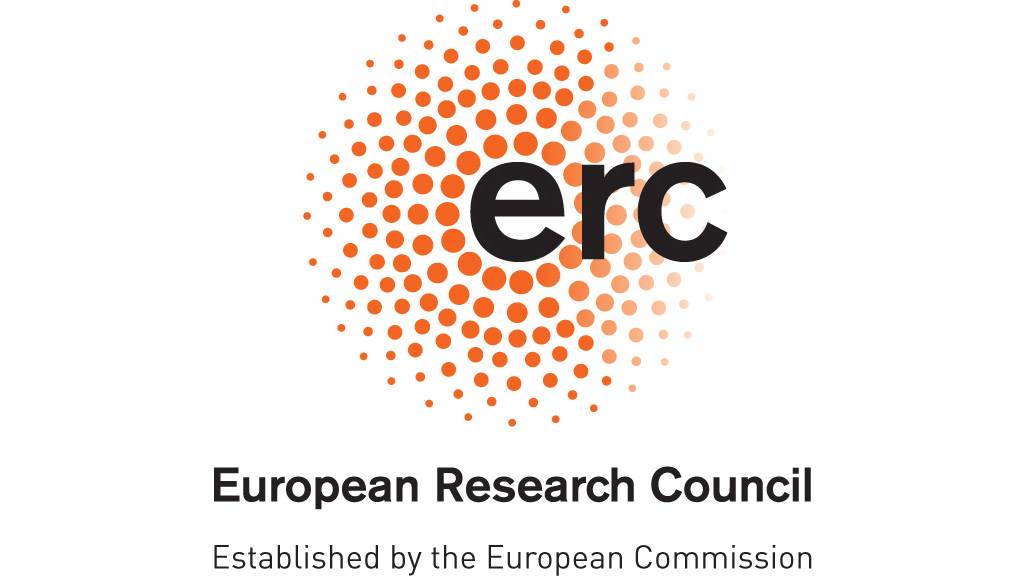 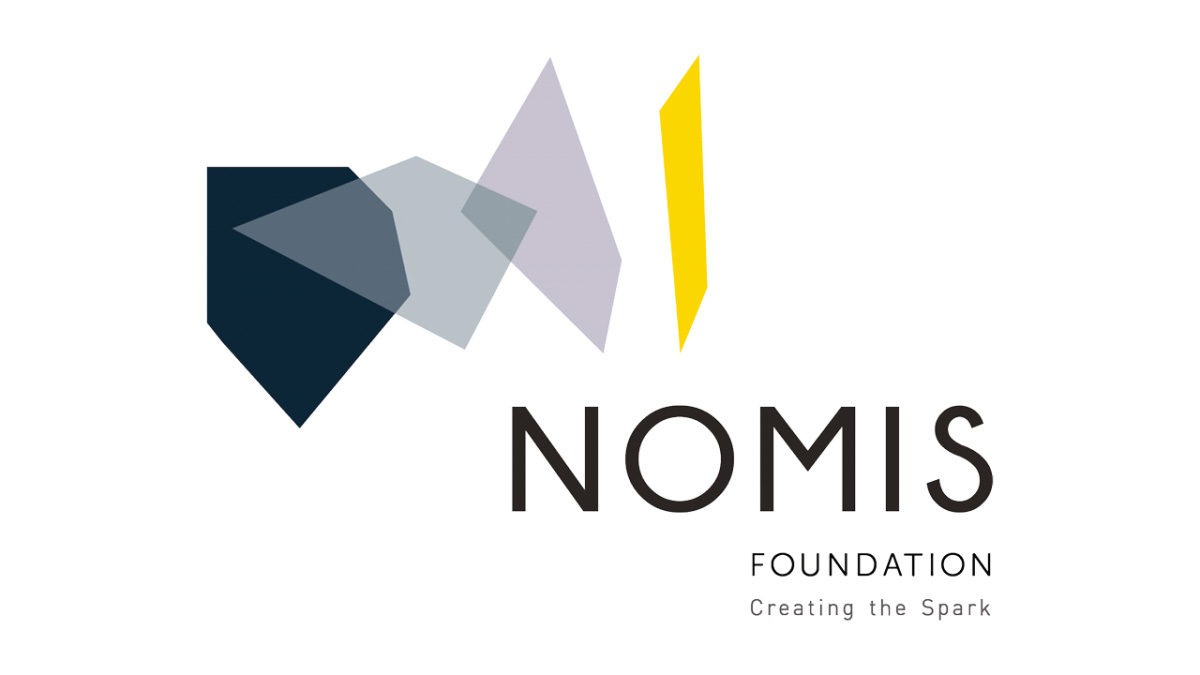